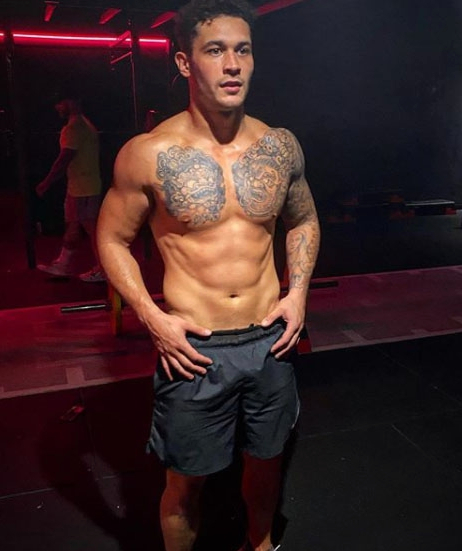 Callum, 24, took to Instagram on Thursday to share some topless snaps as he gave his 856,000 followers a glimpse of his buff physique.

Posting three pics, the first one showed Callum wearing a pair of black shorts and he worked out in the gym.

The reality TV star showed off his large tattoos as he flaunted his toned tummy and muscly arms.

The next snap was taken from behind as Callum flexed his arms and the third one was a selfie he took in his bathroom mirror during lockdown, where his stomach was less defined.

Since being a gannet in isolation, I’ve been training down at @pt41fitness now for some weeks. The reality star said he had overindulged in lockdown

“And as soon as the restrictions were lifted, I give it a good go with the big lad @zakmason__ smashing high intensity workouts in prep for my holiday.

“Didn’t kill myself by eating like a rabbit, I had a nice healthy balanced diet. Sometimes you’ve got to listen to your body and if you want to treat yourself treat yourself,” he added.

“By no means am I a gym guru or a fitness guru but this is just a little progress pic from my current training routine.” Callum said he transformed his physique in just five weeks

Callums were certainly impressed with his hard work and took to the comments section to compliment him on the results.

,” one person said, while a second wrote: “Well done son we will av to get a session in (sic).” Callum has been going to the gym since they reopened Callum is in a relationship with fellow Love Islander Molly Smith

After meeting on the ITV2 show, Callum and Molly found themselves isolating together during lockdown which led to Callum asking her to be his girlfriend.

In an interview with OK! a few months ago, he revealed: “We are boyfriend and girlfriend now. The couple became official boyfriend and girlfriend during lockdown

Callum continued: “I was like: ‘Alright then,’ and she was like: ‘Are you asking me to be your girlfriend?’ and I was like: ‘Yeah.’ And that’s how it come about.”