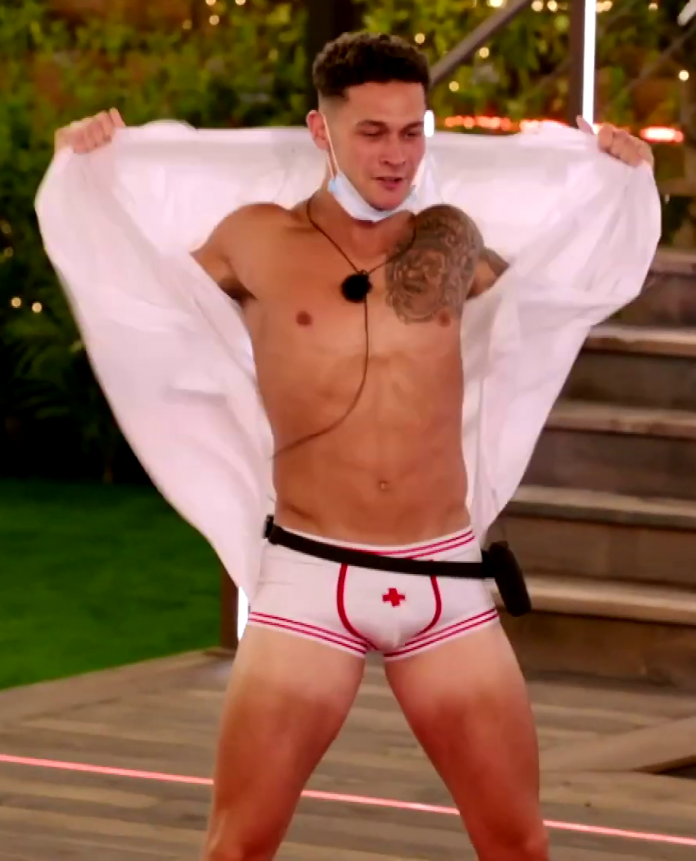 LOVE Island’s girls go weak at the knees tonight as the boys strut their stuff in the dirty dancing challenge.

Callum makes his entrance as a doctor but it’s not long before he’s popped all his buttons off to reveal his toned torso – and the red cross on his tiny white pants.

And Connor is dubbed “ballsy” as he lifts Sophie up while dressed as a Lifeguard.

‘Little Connor’ stakes his claim on Sophie right in front of Connagh’s eyes during the task.

He lifts Sophie up as she screams with delight.

“It was so ballsy and I loved it!” she revealed in the Beach Hut afterwards.

Meanwhile, Paige came out with a whip and gave Mike a full lap dance.

“It surprised me and then she came with the whip, put that straight in my mouth and I was like… OOP!” he said afterwards.

And it seems Mike is getting a lot of attention as the new girl Rebecca kisses him after she makes her debut in tonight’s show.

The 21-year-old bombshell dances for the boys in a sexy swimsuit, before she takes her pick.

The stunner makes her move on the lads, and plants a kiss on Leanne’s partner.

The girls watch from the balcony and look shaken as the model, dressed like a goddess, works her magic.

The brunette has already said that she has her eyes on Mike – and made a beeline for the 24-year-old hunk after her dramatic entrance.

Before heading into the South Africa villa, she revealed she had her eye on “Connagh, Callum and Mike” and that she would go “as far as I need to go” to get the guy she wants.

She previously said: “I like a Jack the lad.

“I havent seen enough of them to know how Im going to approach it.

“I like funny guys, so Im thinking making the guy laugh is a tick in the box.”

It comes after Love Island fans were shocked to learn that new bombshell Rebecca is only 21 years old.

Viewers flocked to social media after the end of last night’s episode confirmed that the brunette beauty will be entering the villa.

The part-time model promised to cause maximum drama as she revealed that she has her eye on Mike Boateng, Callum Jones, and Connagh Howard.

But fans were more interested in her age, claiming that she looks much older than her 21 years.

One wrote: “This new bombshell is 21 years old y’know???? Madddddd, she deffo lied about her age lmaoooo”.

Another tweeted: “This newbie isnt 21 years old. Theres no way.”

A third asked: “Why does the new girl look 35 years old?”

Rebecca, who was crowned Miss Newcastle in 2018, will be making her villa debut in tonight’s episode of the ITV2 dating show.

She is not the only Islander to have been accused of lying about her age this series, with 20-year-old Finley Tapp also accused of being “secretly middle aged”.

Following his arrival last week, one fan tweeted: “That Finley must of had a heavy paper round… 20 years old looking middle aged.”

A second joked: “Someone needs to background check Finley because theres no way hes 20.”