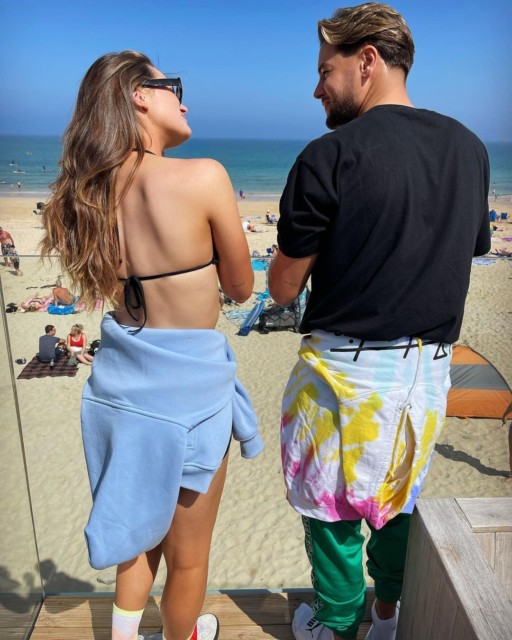 LOVE Island’s Chris Hughes has got a matching tattoo with girlfriend Annabel Dimmock and posted a sweet tribute on social media.

The 28-year-old reality star made things official with the pro golfer earlier this month, and the couple have now made a more permanent declaration of their love for one another.

Chris Hughes and girlfriend Annabel Dimmock have got matching tattoosThe couple both have ‘08.08.21’ inked on the back of their arm

During a holiday to Cornwall, Annabel, 24, shared a loved up snap with Chris overlooking a beach.

As they looked at each other with their backs to the camera, their matching tattoos were visible on the back of their arm.

Annabel captioned the shot: “Beach Babes” and in the comment section, tattooist Mike Love commented: “Pleasure to tattoo you both, looks great.”

On Mike’s Instagram profile, a picture from earlier in the week showed a close up of their inkings, which reads ‘08.08.21.’

Meanwhile Chris posted a gushing tribute to Annabel on the last day of their first holiday together.

Alongside a snap of them kissing in front of a dusky sky at the beach, Chris wrote: “Don’t know where to start. Last night of our first holiday away.

“It’s the closest feeling I’ve had to being in school again, when you crush hard and kind of don’t know what to do.

“The kind of girl, when I’d expect to get home from school and speak to on msn as the nerves got the better of me in the playground.”

He concluded: “I’m lucky, and I’m blessed, and I’m thankful.”

HOAR understands that Chris, 28, and Annabel, 24, met at the Aramco Team Series event in London on the Ladies European Tour where they were paired up and played golf together.

This is the reality star’s first public relationship since he split with former Little Mix singer Jesy Nelson in April last year. The pair went official with their relationship earlier this month Coronavirus crisis could send the benefits bill soaring by an eye-watering £9.6 billion a...