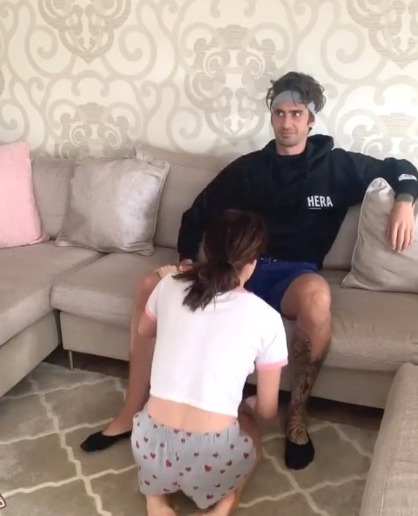 In June, the pair put the rumour mill into overdrive after Chris was spotted leaving Maura’s home in the same clothes he had worn two days earlier.

However, the two have long insisted they’re just close friend – and their latest social media video hilariously backed that up.

In the clip, Maura undertook the latest viral TikTok challenge, which sees men and women pretending that they are about to perform a sex act on their other half.

The challenge starts with the prankster kneeling infront of their romantic interest and fix their hair before opening their partner’s legs, only to pull an item from under where they are sitting, leaving their other half disappointed.

Wanting to prank Chris, Maura undertook the craze while clad in her pyjamas. Following the steps, the ITV2 star left Chris’ mind racing as she kneeled down – only to pull out the TV remote control and leave the funnyman in the “friend-zone”.

“See you soon though yeah!? Lovely Chris was left in the ‘friend-zone’ The reality star shared a hilarious caption alongside the video

The latest prank comes after the ITV2 stars teamed up for a hilarious Titanic sketch last month.

The clip began with Chris dressed as Kate Winslet’s character, Rose, in Titanic, delivering the film’s famous line: “Jack, I want you to paint me like one of your French girls” to Maura.

Adding his own spin to quote, he added: “… wearing this, only this” which left the Irish beauty in a state of shock.

The video then hilariously turned to Chris clad in a zebra-print leotard, pink tulle tutu and a horse mask lying across a park bench. Last month, they recreated an iconic Titanic scene for a rib-tickling TikTok He asked: “How’s it looking?” to which the camera zooms out to see Maura painting a comedy interpretation of his manhood.

The pair’s closeness has had co-stars buzzing for months.

The pair put the rumour mill into overdrive after Chris was spotted leaving Maura’s home in the same clothes he had worn two days earlier in June.

Maura and Chris, left in his Mercedes and headed to her flat nearby. However, they long have insisted they’re just friends.

Ministers urged to scrap VAT on holiday Covid tests as a family of four...