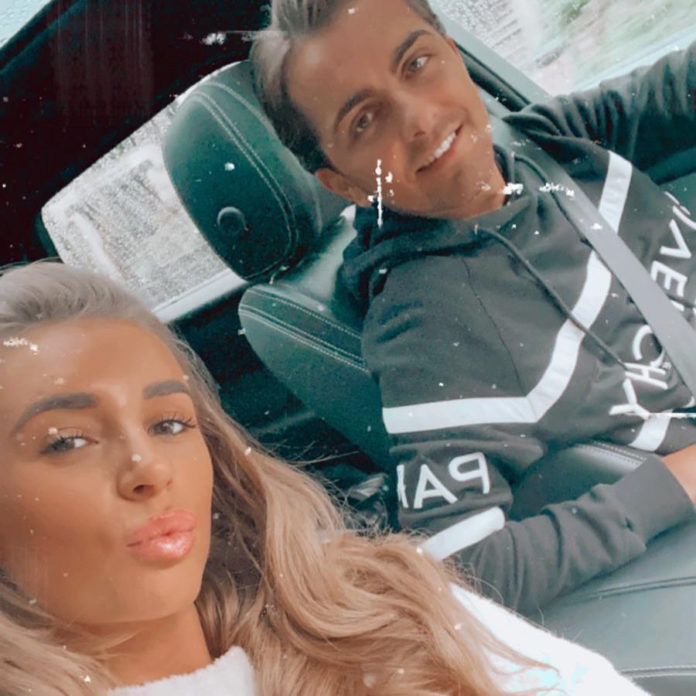 ISOLATION would have been the perfect excuse for Dani Dyer to move on from her doomed romance with Sammy Kimmence.

But it seems to have had the opposite effect as, just four weeks after they split, I can exclusively reveal the Love Island star is giving their romance another go.

A pal of Dani’s revealed Sammy had persuaded Dani to hunker down with him during isolation and said the time together has led her to reconsider her decision to dump him.

They said: “Dani and Sammy’s split was a shock but she felt the trust had gone and that he was bringing her down.

“Sammy wasn’t going to let her walk out of his life without a fight and begged her to spend some time with him. “Since going into lockdown, Sammy has been pulling out all the stops to make Dani give their relationship a second chance.

“They’ve been enjoying cosy dinners and spending hours talking about the future.

“Dani wanted to know Sammy was serious about giving their relationship another chance and he’s pleaded with her to stick with him.

“They were having blazing rows before they split up but now it’s all sweetness and light again.”

Dani dated Sammy for a year before she joined Love Island, which she won with Jack Fincham in 2018. Sammy persuaded Dani to hunker down with him during the pandemic, a pal revealed

When she and Jack split in early 2019, Dani rekindled her relationship with Sammy.

But she kicked him to the kerb at the beginning of March after a series of arguments pushed her to the brink.

The rows started over Sammy’s alleged involvement in a scam which saw OAPs conned out of thousands.

He is accused of scamming two men in their eighties and nineties out of £34,000 by pretending he worked in financial services.

He has pleaded not guilty and will stand trial in the summer. Dani’s pal added: “Dani and Sammy have had a lot of honest conversations in the past week and she’s standing by him.

“She wants to make it work but right now they’re just taking it day by day.”

They say love is blind and in this situation I reckon it definitely is. Run for the hills, Dani.

Riri’s such a tease

RIHANNA brought back her braids in the latest photoshoot for her Fenty clothing collection.

The singer showed off this cream faux-leather jacket and matching baggy trousers from her latest line, which she wore with a red headscarf and scarlet lipstick. Rihanna models a faux-leather jacket from her Fenty clothing collection

The Bajan superstar has built up quite the commercial empire over the past few years, including her Savage X Fenty lingerie line and the Fenty range of cosmetics.

And fans of her music who are desperate to hear Rihanna’s ninth studio album won’t have too much longer to wait.

In an interview last week Rihanna said she was “very aggressively working” in the studio on new material for the long-awaited follow-up to her 2016 record Anti. The Barbadian beauty brought back her braids for the photoshoot

When asked if she was enjoying teasing her followers, Rihanna admitted: “I like to antagonise my fans a little bit.
“Well, they antagonise me too! So they get it right back.”

SHE is softly spoken and beautiful, with an angelic voice, but Ellie Goulding has a dark side.

She says violent gangster movies such as Snatch and Lock, Stock And Two Smoking Barrels were big influences on the video for her new song Worry About Me. HOAR’s mock up of Ellie Goulding in Lock, Stock And Two Smoking Barrels

In the video she is seen beaten-up and bleeding.

Ellie revealed: “I used to watch all those gangster films.

“I loved it when they were all bloodied-up and they’d been punched in the face but they’re carrying on laughing and joking.

“So I love stuff like that. And (the video) gave me an opportunity to act.

“Even if I do a tiny music video where I get to act for a little while, I just love it.”

She added: “I think all the videos from now on are going to be messed-up.

“I love doing stuff that freaks people out.”

A role opposite Jason Statham and Stephen Graham – aka Snatch’s Turkish and Tommy – surely beckons.

MATT Lucas is on course to land a Top Ten with his NHS fundraising song Thank You Baked Potato.

In the Official Charts First Look, the Little Britain comic is in at No5 with the single, which is available for download now. From every sale, 99p goes to Feed NHS – which aims to get hot meals to NHS staff and critical care workers across the country.

After Matt dropped the song on Friday he went straight to No1 on the iTunes chart and on Global’s Official Big Top 40 chart yesterday he was in at No2.

I hope Matt makes it to the top spot but he’s got some stiff competition from Drake, whose new single Toosie Slide is this week’s highest new entry at No3. The Weeknd is still at No1.

SHE has been so busy talking to her pals on Instagram Live that it seemed like Charli XCX hasn’t been doing what she does best.

But I can reveal the Boom Clap singer will announce a surprise new album on Monday. Fans got a hint last week after a document supposedly containing details about the record was leaked. And yesterday excitement hit fever pitch when Charli suddenly deleted her Instagram posts and replaced her profile picture with a black hole.

A music insider said: “Fans are in for a pleasant surprise because she’s dropping her fourth album.

“While other artists are holding back, Charli is pushing ahead.”

Charli has stayed coy about her latest record but last month teased about dropping new music.

She said: “It’s quite an interesting time to release music, as long as you’re doing it in the right way.

“I’ve been speaking with some of my collaborators about possibly releasing something.

“But the intention behind it isn’t to be marketing something and really ramming it down people’s throats, ‘Here’s some music, it’s unfinished but we wanted to put something out for you guys’.”

Charli releasing this album now is exactly what we need.

I can’t wait to hear it.

HALSEY has taken a laid-back approach to isolation and is making the most of the LA sunshine.

The You Should Be Sad hitmaker posed in a silver bikini in her back garden and shared the snap on Instagram. Singer Halsey dancing in the bathroom during lockdown

She also posted a video clip of her dancing in her bathroom ­­– this time in a gold bikini.

It’s not surprising the US singer is making the most of the lockdown, as she only finished the European leg of her world tour on March 12.

If there was any reason to sit back and take it easy, coming off from a month on the road is definitely one of them. Halsey also posed in a silver bikini in her back garden

MABEL says she has been unable to contain her excitement after Harry Styles asked her to join him on his world tour.

The Don’t Call Me Up singer will be his support act in Australia in November.

Mabel said: “It’s going to be amazing. I love his album. Harry Styles has asked Mabel to join his world tour

“I’m excited to fan girl and sing his songs every night as well.

She told Aussie radio station The Hit Network of the crowd reaction: “It’s on a different level.

“I’ve supported a few people on tour and I’ve done big shows but nothing can prepare you for a Harry Styles audience.

“He really is a proper rock star.

“His performing is out of this world.”

Travel quarantine slashed in HALF to 7 days after England’s lockdown ends, Transport Sec...

Amanda Holden stuns in a pink bikini as she sips rosé wine in her...