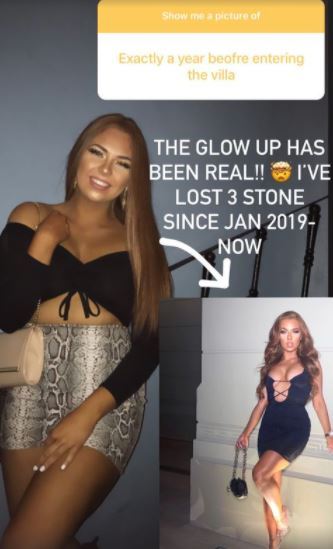 LOVE Island star Demi Jones has praised her own “glow up” after sharing a picture from a year before she entered the villa.

Demi found fame after walking into the Love Island villa in January 2020.

Demi shared her own glow up pictures

But taking to Instagram on Tuesday, she shared a throwback to the year before her appearance on the ITV2 show, and revealed she had since lost three stone in weight.

A fan asked Demi to share a picture from “exactly a year before entering the villa”, and Demi added: “The glowup has been real! I’ve lost three stone since January 2019 – now.”

Demi entered the villa halfway through the first winter season of the show, and was coupled up with Luke Mabbott.

They made it to the final but split four months after leaving the show. She made it ot the final with Luke Mabbott

The 22-year-old spent her Christmas break living it up in Dubai and decided to share a swimwear snap on Instagram as she soaked up the sun.

But she was forced to snap back at her followers after they shockingly asked if she was pregnant.

In the picture, Demi is wearing a nude-coloured swimsuit and a white linen shirt as she places one hand on her tummy and grins for the camera.

She simply captioned the post: “Wearing the smile god gave me,” and her 1.1 million followers were quick to comment. She was trolled by fans who wondered if she was pregnant

One person wrote: “I thought she was pregnant,” followed by a laughing emoji face, but Demi was having none of it.

Another troll also questioned her smile from God and commented: “Pretty sure you got it in turkey but go off (sic).”

And Demi did not hold back, and responded: “I had braces for 4 years and brush my teeth twice a day, try it!” Demi wasn’t the only reality star who fled the UK in December and the lockdown tiers to catch some real vitamin D.

Nicola Roberts to release first new music in nearly a decade after winning The...

EastEnders Jessie Wallace made an a**** of herself before two month suspension for boozing...