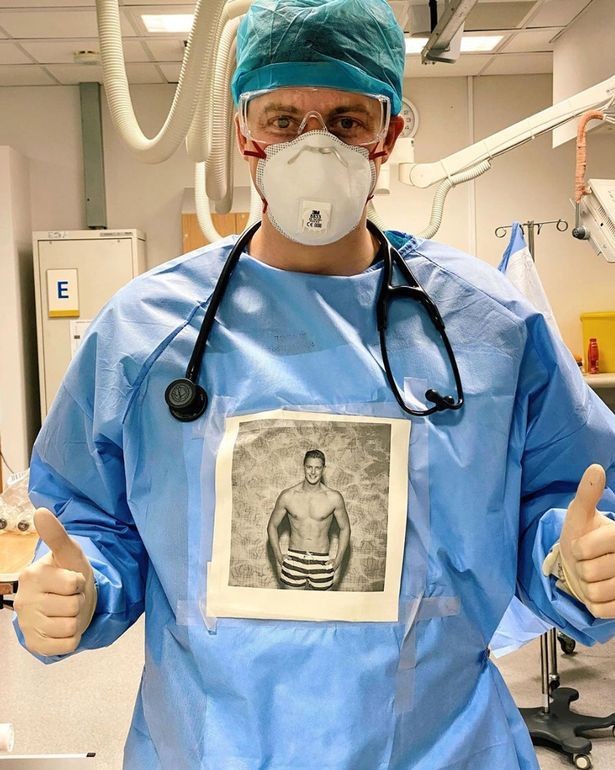 He battled deadly sepsis, which left him bed-bound for several days and in need of urgent treatment.

Alex, who works at South London’s Lewisham Hospital, says the sepsis experience underlined for him the NHS’s importance

The shocking experience showed Alex, 30,  just how it feels to be on the receiving end of care — and as he becomes the latest star to support our Who Cares Wins Appeal for the NHS he tells how it spurred him to kit up and fight on the frontline against coronavirus.

He said: “I’d just finished a shift in A&E when I realised I had become more and more unwell.

“I cycled home and really struggled. I had a shower and realised I was very sick indeed. I got myself over to nearby St Thomas’ Hospital (in central London).

“I looked awful and felt as though I was going to collapse. I got seen very quickly by the ER nurse who rushed me into resus (resucitation) where I received intravenous antibiotics, fluids and treatment. Dr Alex battled deadly sepsis, which left him bed-bound for several days and in need of urgent treatment

“I was on the ward for five or six days. They saved my life.”

Alex, who works at South London’s Lewisham Hospital, says the experience underlined for him the NHS’s importance.

He said: “I left hospital on the Friday and tried to go back to work the following Monday.

“But they didn’t let me back until I had recovered properly. I went back on the Wednesday instead. With times harder than ever for hospital staff, Alex has urged readers to dig deep for our appeal.

He said: “I want people to appreciate how lucky we are to have the NHS — and that it has been underfunded for many years.”

Praising the courage of frontline medics during the current crisis, he added: “Times are tough but in the NHS we roll up our sleeves and get on with it.

“Our resus department has seven or eight beds and in just one hour we can have multiple ambulances coming in with critically ill patients of all ages.

“Of course we see more of the vulnerable categories and the elderly but I’ve seen plenty in their twenties and thirties. Loads of them are fit and well, without underlying health conditions. So this idea you’re immune to being unwell if you are young and fit isn’t true.”

Despite the obvious strain on the NHS, Alex loves his job. Dr Alex with his NHS family

“We’ve never had a situation where we can’t use or haven’t had PPE, which is hugely important.

“As a trust, they are incredibly supportive. I’m very lucky to work for Lewisham.”

Naturally, however, Alex fears for the mental health of his colleagues in the NHS family. He said: “I think it has made everyone appreciate the people around them that little bit more, which is a good thing.

“But it’s difficult to see death and people dying. Of course, we do already see that in A&E but it has been extremely ramped up in the past few weeks.

“There will be an amount of NHS workers who are going to need therapy after this.”

‘Heroes at heart of NHS need our support’

In addition to his role as an A&E medic, Dr Alex works to dispel scaremongering health myths and offer medical advice via his YouTube channel, on social media @DrAlexGeorge and via his podcast The Waiting Room. Despite the obvious strain on the NHS caused by the coronavirus pandemic, Alex loves his job

He has maintained an active voice in relation to the Covid-19 crisis — and plans to continue doing so throughout the pandemic and beyond.

He said: “I absolutely love doing my podcasts.

“I love giving people information, so there will be a fourth series coming soon, for sure.

“I think people are interested in their own health and fitness more than ever now, so I will continue to advise people on that and give more insight into life on the front line.”

From being an NHS A&E doctor at the forefront of the Covid-19 crisis to being a seriously ill sepsis patient back in 2017, Alex knows only too well how important the NHS is to the nation — especially the heroes at its heart who need our support.

He said: “We can’t allow the NHS to be abused, misused or underfunded.

“We need to look after its staff and the hospitals.

“We need to protect the NHS, nurture it, give it everything it needs.” Prince Harry slammed for claiming UK coronavirus crisis is not as bad as public...

I’m A Celeb start time MOVED as Ant and Dec pushed out of 9pm...