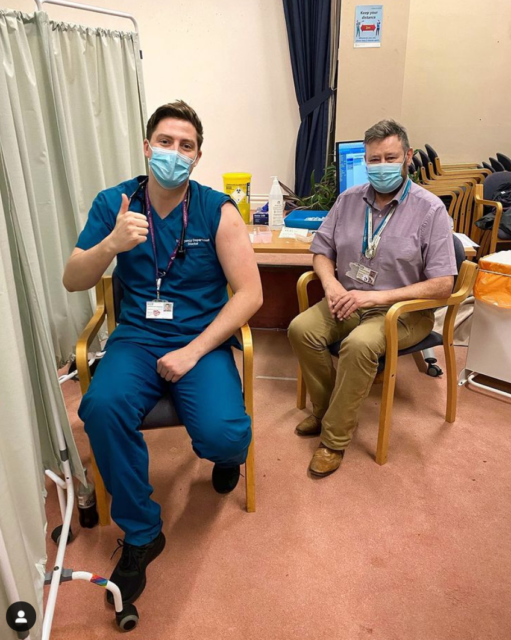 LOVE Island’s Dr Alex George has had the coronavirus vaccine as he works in A&E.

The reality star was given his first Covid jab while in his hospital scrubs today.

In a photo on Instagram, Dr Alex gave a thumbs up with one hand and showed off his exposed bicep, where the shot had been administered.

Sharing his news, the frontline doctor, 30, captioned his snap: “I HAVE HAD THE VACCINE!!

“We have all been hoping for a vaccine ever since this virus appeared. Felt quite emotional having the jab, it has been a hard year! I am so glad there is light at the end of the tunnel.

“Huge thanks to Chris, one of the hospital pharmacists, for giving me the injection and to everyone working so hard to roll this out. It was a quick jab then back to work for me! Full disclosure I was given a star sticker for having the vaccine and being a good boy. Onwards.”

Boris Johnson set an ambitious new target to vaccinate at least the most vulnerable 13 million people by February 15, which government medical advisers have said will stop 99 per cent of hospitalisations.

By the middle of February, he said the nation was expected to have been offered to everyone in the top four priority groups – all people in care homes and carers, everyone over the age of 70, all frontline health and social care workers, and everyone who is clinically extremely vulnerable.

If the target is met then the aim is to significantly lift restrictions by the beginning of March.

The PM said: “With every jab that goes into our arms, we are tilting the odds against Covid and in favour of the British people.

“And, thanks to the miracle of science, not only is the end in sight and we know exactly how we will get there.” Dr Alex got his Covid jab after spending his first Christmas since his brother’s suicide alone due to the coronavirus pandemic.

He revealed the heartbreaking news that his sibling had passed away after a mental health battle in July.

He said she is now on a mission to meet with Boris Johnson and urge the government to make mental health education a priority in UK schools across the UK. PSVR 2: PS5 is getting virtual reality headset with NEW controller for ‘ultimate gaming...

Hollyoaks Martine will get back with ex Felix says Kelle Bryan as she teases...

Cyber scammers and other fraudsters raking in £95 a second in Britain, study finds