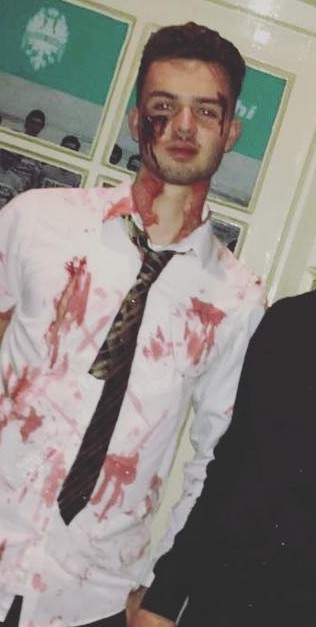 LOVE Island star Finn Tapp looks unrecognisable in a string of old pictures before he beefed up, grew a beard and strutted into the villa.

The 20-year-old footballer from Milton Keynes is seen messing around during a Halloween pub crawl back when he was a teenager.

He is seen looking much smaller than the Love Island hunk viewers are used to seeing, in a shirt spattered with fake blood, half a tie and with gory make-up on his face.

Finn appears alongside three pals in the snap taken during a boozy trip around town.

Another picture he is tagged in shows him clean-shaven standing at the back of a group of people as they pose at the bar of a pub.

The lad has made a big impression in the Love Island villa ever since joining with Connagh Howard and announcing with almost indecent haste that he has a foot fetish.

Viewers saw him couple up with Lewis Capaldi’s ex Paige Turley, 22, after managing to win her over on a date.

However, he left many in disbelief after revealed his age with some viewers having assumed he was actually closer to 30.

It caused problems in the villa too, with Paige calling herself a “cougar” while Siannise – who he also picked for a date – telling the girls insisting Finn’s age is a problem.

I’m A Celebrity chaos as TREE and rocks fall onto set as Storm Barra...

The Queen is looking for a new cleaner and youll get paid to go...