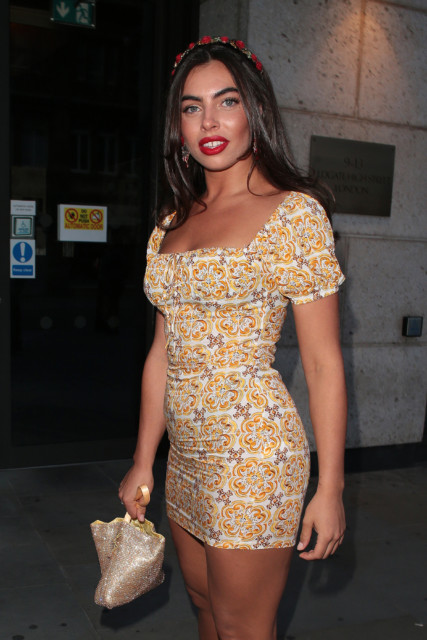 FORMER Love Island star Francesca Allen was pictured having a screaming row with two strangers outside a pub in Essex.

The 24-year-old boutique owner – who appeared in the famous villa in 2019 – seemed far from her bubbly self as she was spotted at the venue on Saturday.

Francesca and the other woman got up close and personal whilst screaming at each other outside the King Oak pub in High Beech, Epping Forest.

As the argument heated up, the reality star was seen waving her hands and pointing her finger in the face of the woman.

The pair – who were reportedly arguing over a man – then squared up to each other as onlookers watched on. She appeared in high spirits with pals earlier this week

Despite numerous attempts to break the fight up, tensions reached boiling point and a police officer was forced to intervene.

A witness to the row told MailOnline: “They appeared to be fighting over some guy.

“He was on the side and basically telling them to calm down. It didn’t seem right, like they were fighting over him.

“Francesca was trying to stay calm but when the girl got involved, that’s when she lost it and went for her.” The brunette beauty was far from her bubbly self The reality star appeared in the villa last year

Meanwhile, a Essex Police spokesman said: “We were called at around 5.10pm on Saturday 30 May, with reports of a disturbance outside the King Oak pub in High Beech.

“We received information that a large group of people had gathered on green space outside the pub and reports of people fighting.

“We attended the scene and gave words of advice to people about congregating.

‘They were understanding and left the vicinity without issue or the need for enforcement action.” She was previously coupled up with Curtis

Francesca’s rep told HOAR: “Francesca was approached by two unknown females on Saturday afternoon who began verbally then physically abusing her. In self-defence, Francesca defended herself.

“The attack was witnessed by the police and Francesca was asked if she wanted to pursue the matter, to which she declined.”

The brunette beauty rose to fame when she entered the Love Island villa towards the end of the show, choosing to couple up with professional dancer Curtis Pritchard.

As well as her work as a social media influencer, Francesca – who was eventually dumped in a double elimination with Michael Griffiths – owns her own fashion boutique.

Last month, ITV bosses revealed their decision to pull the plug on Love Island for the first time in the show’s history because of the coronavirus outbreak.

The decision to cancel the popular ITV2 show came after bosses admitted they could not guarantee the safety of the contestants amid the on-going Covid-19 pandemic. Schools will only open when it’s absolutely safe – but Matt Hancock won’t rule...