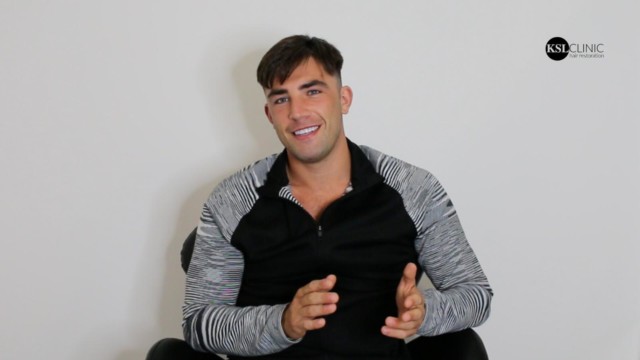 LOVE Island star Jack Fincham reveals he’s had a hair transplant to cover up a scar on his head.

The 29-year-old suffered a nasty cut to his head during an accident at home, and it left him with a bald spot when his hair grew.

Jack also took the opportunity at the KSL Clinic to give his hairline a boost too and was thrilled with the results.

He said: “I can’t believe how straight forward it is, literally they just drill in at the back, take the hair out and put it in a pot! I didn’t think it was that simple, but it really is!”

In his procedure, hair follicles were removed one by one from the donor area and then small incisions were made for the hair follicles to be placed on the new site.

After his op Jack could be seen smiling with medical tape around his head. He said: “I was well nervous before I had it. But once I laid down with Netflix on, a couple of toilet breaks, I was sweet.”

The reality favourite was impressed by work carried out on his celeb pals, and it persuaded him to book in a procedure.

“They all spoke really highly of their experience here at KSL Clinic and with their hair transplant surgeon Dr Matee. Jack has also been having PRP treatment for 18 months

Dad-of-one Jack has had Platelet-rich plasma (PRP) treatment to help keep his hair strong and healthy for the last 18 months.

The minor procedure sees patients get their own platelets injected back into the scalp to stave off hair loss.

Jack previously approached the clinic for a transplant but was told he didn’t need one.

He said: “I appreciate the honesty of KSL Clinic and the advice given to me by their hair surgeon Dr Matee. I was informed that I didn’t actually need a hair transplant when I first visited the clinic one year ago – not many places would be as truthful.”

Speaking ahead of his procedure, Jack explained: “I’m here to get a hair transplant to fix a scar on the top of my head.

“I had an accident at home and cut my head open so now I’ve got a scar.

“I’m going to fix the scar so it’s not a bald spot in the middle of my head.”

The Queen spoke to us with the calm and courageous honesty that we have...