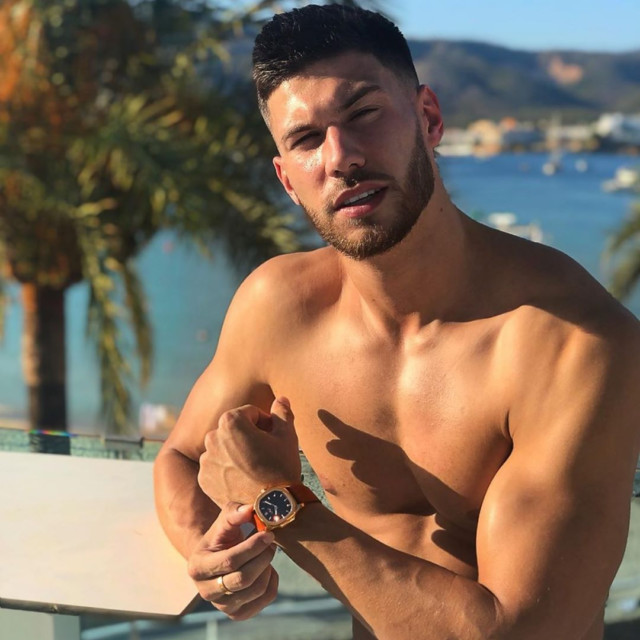 JACK Fowler found fame on Love Island on the back of having the perfect body –  but that same body was left paralysed and wheelchair-bound after he was struck down by a terrifying disease.

The reality TV star, who is just 24, was left unable to walk earlier this year after he fell ill with a rare and aggressive neurological ­condition.

Personal trainer Jack endured an inflamed spine and damaged nerve fibres as a result of having transverse myelitis.

Medics still don’t know the cause and it only affects about 300 people a year.

But he was determined not to ­disappoint fans of the ITV2 show by presenting a less-than-idyllic image of his life.

So he continued to post photos of himself on social media, holidaying in sun-drenched destinations while he secretly had treatment. Earlier this year he was left paralysed and wheelchair-bound, but he hid his disease on social media

He told the Oxford Union: “Instagram, social media is absolutely fake. At the start of this year — no one knows this — I had something called transverse myelitis.

“I lost all movement in my legs and my left arm, paralysed, I was in a wheelchair for two or three weeks.

“On my Instagram I was ­having a wicked time, I was having a great time.

“I was in Dubai, I was in Thailand for all of the two weeks because that’s the ’gram making it look like that. “But realistically, I wasn’t — I was going through the hardest time of my life.”

Londoner Jack appeared on the 2018 series of Love Island, arriving on day 26 and getting dumped 27 days later.

Yet his good looks and chiselled body earned him an army of fans and followers on social media.

His Instagram account alone has 1.3million followers, which he uses to showcase his luxury lifestyle and ­provide workouts. Jack made his health revelation as he spoke to the Oxford Union recently as part of a debate at the university called Should We Regret The Summer Of Love?

It saw former contestants including Malin Andersson and Amy Hart take part in a discussion with a ­feminist academic about the TV phenomenon and its impact on society.

Jack’s latest Instagram pictures show he has now made a full recovery.

But hopefully his words will show fans the difference between real life and the world of social media. Jack appeared on the 2018 series of Love Island

JACQUELINE Jossa shows off one of the colourful jumpsuits she’s unveiling as part of her In The Style clothes range.

The I’m A Celebrity star said: “Seeing as I’ve lived in these, I thought it was only right to bring them back in LOADS of new colours for summer.” LEN Goodman may have stopped being a Strictly judge years ago but he’s clearly still the man in the know.

Coronavirus has left a question mark over whether BBC1 will have the show up and running this autumn. But catch-ups with his old co-stars have given him hope.

Lockdown stopped Len resuming his job on Dancing With The Stars in the US this year, but the virus might lead to another telly role.

Sarah’s shock at the Vic

I REVEALED how social ­distancing had forced the Beeb to film Talking Heads on the EastEnders set.

But it was still a bit of a ­surprise to see Sarah Lancashire appear in the Queen Vic pub. Sarah Lancashire starred in tonight’s Talking Heads episode, appearing as a middle-aged woman who wanted to have sex with her 15-year-old son

A much bigger shock, ­however, was the character that the ­former Corrie star played in the mini-drama – a middle-aged woman who wanted to have sex with her 15-year-old son.

The 30-minute monologue by Alan Bennett, shown on BBC1 tonight, contained quite a lot of eye-opening detail about her character Gwen’s incestuous desire.

The married mother of two not only talked about the size of her lad’s penis but also his impressive physique.

And that was some of the tamer ­content. Just as well it went out after the watershed.

EVERYTHING looked rosy for BBC1’s The Luminaries when 6.2million saw Sunday’s first episode.

But audience figures halved for Monday’s second episode of the period drama, which stars ex-Bond girl Eva Green and Eve Hewson, daughter of U2 star Bono. Viewers are switching off from The Luminaries, as they say the BBC saga is too dark and confusing

Viewers complained that the saga about the gold rush of 1860s New Zealand was too dark and confusing.

Pip Lee tweeted: “It’s looking dreadfully like one of those series where it’s ­­perpetually dark.”

And Jonathan Rodgers tweeted: “Obviously it was very stylish but does anyone know what was going on?”

At least after the BBC’s recent mumbling-filled dramas we can hear what they are saying, even if we don’t always understand the scenes.

COURTNEY Act has revealed how she managed to wangle her way to an ongoing role in Australian soap Neighbours.

Speaking on Good Morning Britain, the drag queen – who’s previously been on Celebrity Big Brother and RuPaul’s Drag Race – said: “The executive producer, Jason Herbison, was on set, and I sort of jokingly – thinking that the idea was ridiculous – said, ‘Oh my God, I should totally come and perform at ­Lassiters!’