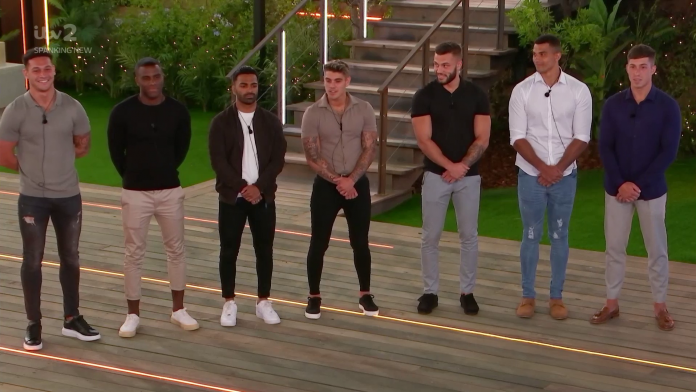 LOVE Island fans have been left furious at Jess Gale for mocking Nas Majeed’s height – and then falling for Luke Mabbott who is the same size.

The 23-year-old’s best friend this week slammed the show for “de-sexualising” Nas – and now viewers are angry about how Luke M was treated differently.

Jess friendzoned Nas as soon as they were coupled up and made him the butt of a joke when she guessed his biggest fear was “heights” during a group challenge.

As all the Islanders burst out laughing, Nas tried to brush it off by saying: “I don’t like being too high up, yeah…”

Speaking to the camera he added: “I allow them to banter me about it because realistically near enough every other thing about me is eight out of ten…”

Jess set her sights on Luke M in last night’s recoupling leaving Nas in danger of being dumped from the villa.

Jess teased Nas about his height in a challenge last week

But as the boys lined up to find out their fate, viewers noticed that Luke M and Nas are actually the same height.

One said: “Why did no one tell me this luke boy was short??? How are you all on Nas for his height but say nothing for this kid.”

Another added: “Luke M really be the same height as Nas but only my boy has to hear s*** about it and be put in a ‘friendzone’.”

Someone else said: “Wait how can all the girls say Nas is too short for them yet the two new Lukes are pretty much the same height.”

Nas’ pal complained he was being ‘desexualised’

A viewer claimed: “Watch the girls go goo goo gah gah for White Luke and dismissing our boy Nas, when both of them are actually the same height.”

Another fan noticed: “Luke M and Nas are the same height.”

It comes after Nas best friend hit out at the ITV2 show for calling him a dog in an official tweet.

The Love Island Instagram account posted a video of the 23-year-old jumping on Callum and Sophie in bed in the morning, writing: “Actual footage of my dog waking me up at 5am.”

Nas’ pal Murad Merali furiously wrote: “Comparing my best friend to a Dog, for no reason? Whats going on here?”

He added: “The desexualisation and objectification of Nas is unsettling to see.”

Nas has been friendzoned by the girls ever since he arrived, when he was rejected by Siannise, but has attracted an army of fans for being friendly and genuine.

Another follower agreeed with Murad, writing: “Its like they just put him in there to tick the diversity card cos the way theyre moving atm doesnt seem like any girls are coming for him, sad because hes the nicest guy in there.”

Ant and Dec reveal they’re tested for coronavirus every four days so they don’t...

VAT could be slashed to help get Brits spending again

Inside the surprising celebrity hair secret of TV’s most famous faces including Strictly’s Rose,...