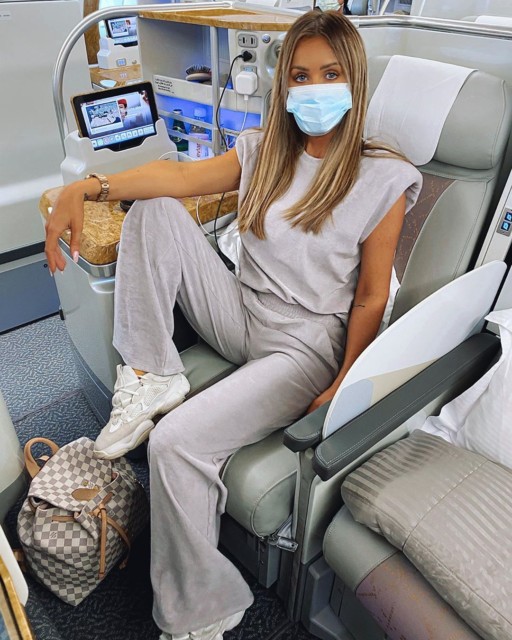 LOVE Island’s Laura Anderson hit back at a fan who criticised her claim she “started at the bottom”.

Former cabin crew member Laura shared an Instagram photo of her sitting proudly in business class on a flight to Dubai.

Laura shared this snap of herself flying first class

But a disgruntled fan mocked, “You started from the bottom” alongside three laughing face emojis. “Just say thanks to Love Island,” they added.

Defending her statement, Laura quipped: “I was cabin crew for 10 years matey.”

The troll continued: “Yes matey I understand but you know you didn’t work that hard. Before her rise to fame in the 2018 series of the ITV reality show, Laura worked as a flight attendant for United Arab Emirates for a decade. Laura shot to fame in the 2018 series of Love Island Laura also lived in Dubai before going on the ITV show

The 30-year-old – who fondly referred to Dubai as ‘home’ in the caption – also received some supportive comments from fans.

“Used to serve now being served like a queen YASSSS,” one said.

Another wrote: “It’s so nice to be in first or business. Girl I get you!” Laura moved to Scotland from London with her boyfriend, Tom Brazier, in March

In March, Laura revealed she was leaving London and heading back to her native Scotland with her boyfriend, Tom Brazier.

“My boy and I have decided, London..you’ve been beaut. We met here, it’s been lush but I’m taking you Home Buddy!!!”