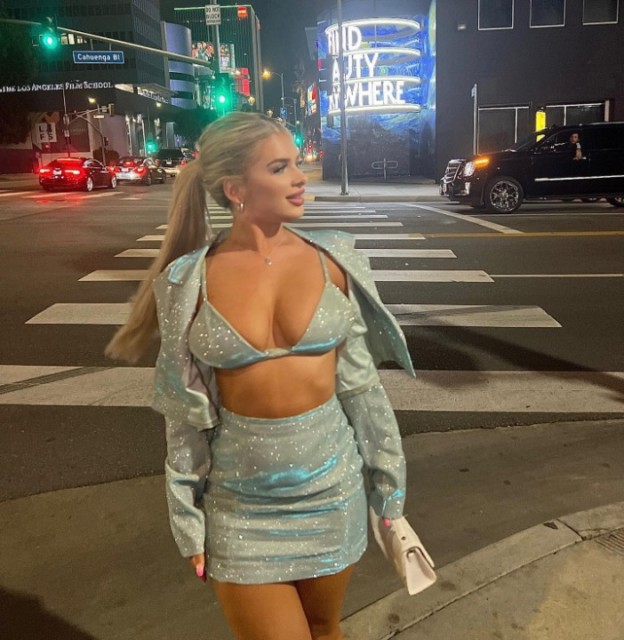 LIBERTY Poole looked amazing as she flashed her abs in a tiny bikini top during a night out in Los Angeles.

The 22-year-old wore the sparkly silver top with a matching skirt and jacket and accessorised with a tiny white bag.

Love Island star Liberty beamed as she posed for the camera in a series of shots uploaded to Instagram.

She wore her long blonde hair tied back in a ponytail and playfully tossed it over her shoulder as she strutted her stuff.

Liberty captioned her upload: “She can beat me but she can’t beat my outfit

It comes after Liberty and her fellow Love Island star Kaz Kamwi were held up a knifepoint in a terrifying attack in the Californian city. HOAR on Sunday revealed how passers-by alerted cops when the reality TV pair were targeted by a crazed 40-year-old woman.

Two men nearby were able to jump to their defence on Thursday night and apprehend the attacker.

A source told us: “Liberty and Kaz had been just heading to a party and got out of their car in the wrong part of the neighbourhood.

“Out of the blue, this woman appeared with a knife and threatened them.

“Liberty and Kaz were obviously shocked and terrified — especially because guns are legal in the US.

“But fortunately for them, two men who had been walking past came to their rescue and called the police.

“The girls have been left shaken up by the incident and are just surprised that it happened to them.

“But they’re grateful that the two men were in the right place at the right time, to help them.” Homeowners who get help from banks with mortgage payments from November will have credit...

Prince Andrew interview recap and reaction from the Newsnight special

Love Islands Shaughna slams Callum as a liar who deserves a Bafta in epic...