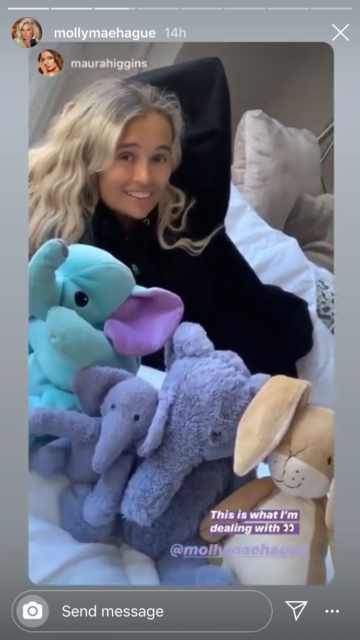 The Irish beauty spent a low-key evening at the couple’s new £1.3million Cheshire apartment following a night out at Essex celeb hotspot, Sheesh, with her BFF Jay Worthington.

The night before, the group had partied all night in London’s swanky Mayfair yet Maura, 29, has returned to the leafy county with Molly, 21, and Tommy, also 21, for some rest and relaxation.

Taking to her Instagram Stories to give an insight into her chilled stay, Maura zoomed in on Molly wrapped up in a hoodie and surrounded by cuddly toys, including her infamous elephant Ellie Belly, who had a starring role in the Love Island villa.

She captioned with the words: “This is what I’m dealing with,” and two wide eyed Emoji icons.

Molly later did a puppet show with the toy, during which the vlogger sipped a Coke Zero. Maura, 29, was seen snuggled in a duvet on Molly and Tommy’s sofa Molly, 21, even lit her best Jo Malone candle for the occasion Love Island lovebirds Molly and Tommy, both 21, moved into their £1.3million apartment earlier this year Molly put on her show with her now infamous cuddly toy, Ellie Belly

Meanwhile, Molly documented scenes from the jam-packed weekend on her Stories page, and showed Maura attempting to try on some of Tommy’s huge trainers.

She could be heard giggling as Curtis Pritchard’s ex attempted to waddle around in the oversized footwear.

Later tho, it was back to chill time as the females lazed on the sofa and attempted a duet.

Both held their phones to their faces as they sung, with Molly quipping in the caption: “X Factor 2021 hope you’re ready.” She added: “We both just discovered how amazing we sound as a duet.”

Later in the evening, BeautyWorks ambassador Molly proved it had been the ultimate pamper evening after lighting her huge Jo Malone scented candle to mark the occasion.

Molly confessed: “I lit the big boy for the first time.

“Not sure what I was saving it for to be honest,” as she rounded off her cute sleepover posts for the night. Any animosity was put to one side when Maura started dating Curtis Pritchard, far right, from whom she has now split

Molly previously told her Instagram fans that she and Tommy moved into their plush rented flat after deciding their old place in Manchester felt too “sad” following their puppy Mr Chai’s death.

The reality star added that they’re still on the hunt for a permanent house they can buy together – despite their amazing surroundings.

“We’ve been looking for a house since we left Love Island, we’ve literally been on Rightmove every day,” Molly revealed.

“I don’t want to take out another six months on this place, because renting is so expensive.”

I’m a single mum-of-two with cancer and rising costs mean I have to work...

Love Island’s Lucie Donlan shows off her amazing figure as she poses in sheer...