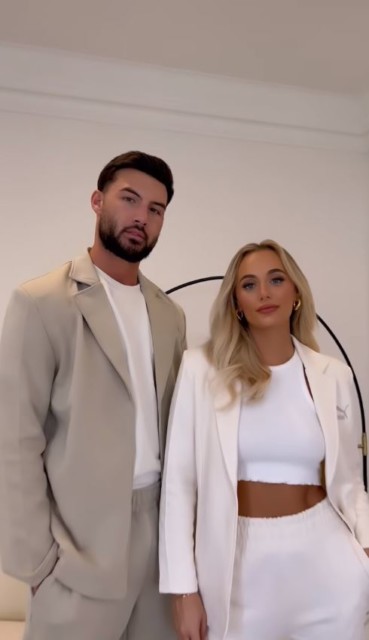 LOVE Island winners Millie Court and Liam Reardon have been spotted together for the first time in WEEKS.

The couple crushed rumours that they had split after fans noticed that they hadn’t been seen on each other’s social media for over a month.

Millie, 24, and Liam, 22, took to Instagram for a new video, showing off their “matching couple fits” to their following.

The couple – who took home the cash prize in last year’s round of the ITV2 dating show – could be seen dressing up in suits and trainers.

The couple could be seen smiling next to one another as they showed off their new cream-coloured outfits to compliment each other.

Millie, who this week signed as an ambassador for sports brand Puma, donned her two-piece suit from the company, alongside her new shoes. BODICE TO DIE FOR “Liam and I both dressed in the new puma tailoring apparel and Cali Dream trainers,” she wrote in the caption of the post.

The Instagram upload marked the first time the couple had been photographed together on social media in six weeks.

The model had been spotted at photoshoots in LA, while her beau has been busy back in the UK – fuelling split rumours on social media.

The reality TV stars have been busy living apart in different countries, last posting on social media together in February.

Millie has been Stateside to shoot campaigns for ASOS and Puma in recent weeks, taking fans behind-the-scenes on Instagram.

“Hopped off the plane in LAX,” she captioned the series of snaps, showing herself at the airport and landing in the American city.

She followed up with further posts showing her exploring neighbourhoods in Hollywood, meeting with friends and heading out.

The influencer left Liam behind – who in the meantime was seen hanging out with his Love Island pals in London over dinner.

He was also photographed training in Wales – shooting an advert campaign for fitness brand Under Armour.

Last month, Millie also attended her fashion launch event with fellow Islander Lucinda Strafford – but her beau Liam was nowhere to be seen.

Other eagle-eye fans think they’ve split because they noticed Liam recently followed a series of model and influencers online.

Fans also referred to Liam’s comments on the Heat podcast, where he said he had “nothing to wake up for” after winning Love Island with Millie.

“I’ve been put into Essex, no family no friends. Obviously, I’m with Millie, which is good… I’d wake up, but have nothing to wake up for,” he said. Millie broke her silence on the split rumours earlier this month, as she shared her reaction to his underwear campaign add.

She shared the emojis of a flushed face, hot face and another with a hand over its mouth as she lusted over her man – appearing to confirm the couple were still going strong.

Prince Andrew and Epstein pimp Ghislaine Maxwell have a pact to save each other...

I’m an appliance pro – the cheapest time to run your washing machine to...

Kids losing out on education is one of the biggest outrages of the Covid...

Jacqueline Jossa chats to Im A Celebs Myles Stephenson by the pool after he...