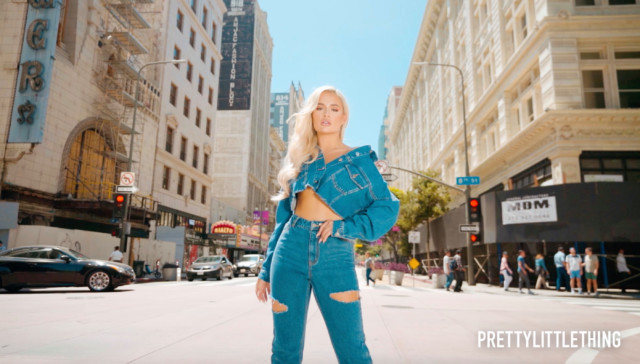 The reality star then went on to sign a £1m deal with rival clothing company PrettyLittleThing.

Last night, Molly-Mae stunned fans as she wowed in a new advert for PrettyLittleThing.

And adding salt to the wound, the promotional clip made its debut on Channel 4 during Inside Missguided, a documentary about the Manchester-based brand rejected by the Love Island runner up.

Viewers watched as the brand marketing director Samantha and owner Nitin Passi, discussed wooing the 24-year-old into their fold before settling on the offer – which included the option to make a Missguided outfit for her infamous stuffed toy elephant called Ellie Belly. She instead went for a £1m deal with PrettyLittleThing It premiered on Channel 4 during a screening of Inside Misguided

A narrator said: “If we land Molly-Mae, she’ll take on £350k, but for us it’s worth so much more and could probably put us back on top.”

But despite their belief that other brands would only offer the star £200k, PrettyLittleThing led the way and put £1m on the table.

On leaning the news, the narrator commented: “This is a right kick in the b******s, and to make it worse, Molly-Mae went with one of our main rivals.”

HOAR revealed the beauty – who is already worth an estimated £2million with boyfriend Tommy Fury – signed a £600,000 deal with PrettyLittleThing earlier this month.

She will pick up the staggering salary for just six months’ work with PrettyLittleThing. Missguided were desperate to land the beauty for their new campaign Molly-Mae and boyfriend Tommy Fury are worth a reported £2m

Molly-Mae has a hugely popular collection with the Manchester-based fashion giant and the extension keeps her on board until 2021 at least.

In addition, HOAR revealed last year that Molly-Mae had bagged a £500,000 deal to plug the brand’s clothes – the biggest cheque any of the Love Island class of 2019 received.

Who is Nas Majeed? Winter Love Island contestant and builder from London

Prince Harry and Meghan Markle hit back as Queen strips them of Royal titles...