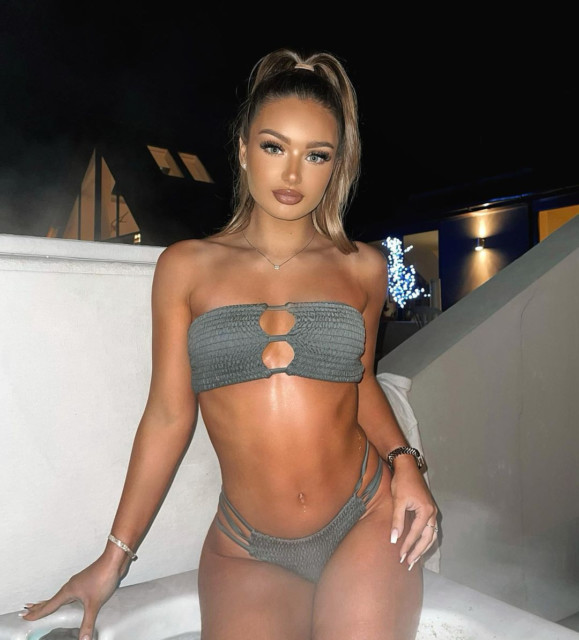 The fashion boutique owner, 21, entered the villa with other bombshell Millie Court, 24, on Tuesday night.

Last night the two received a text telling them that they could pick three boys to go on a date with.

But as Lucinda got to know the boys viewers of the ITV2 show couldn’t help but notice that she looks very familiar.

Many flocked to Twitter to compare her to winter Love Island star Molly Smith. Fans are convinced that Lucinda is a “carbon copy” of Molly One wrote: “Lucinda is LITERALLY a carbon copy of Molly Smith from last year #loveisland.”

A second said: “Lucinda reminds me so much of Molly Smith from season 6 #LoveIsland.”

A third tweeted: “Lucinda is too easily impressed. She may be stunning but if she likes Brad then they’re probably well suited. She might be the Molly to his Callum. #LoveIsland.”

Another said: “Every time I look of Lucinda I think of Molly that was on the winter love island #LoveIsland.” Lucinda has also joined the show as a bombshell

A fifth chimed in: “Lucinda literally reminds me of Molly Smith #LoveIsland.”

Her stunning looks and bubbly personality certainly did that as she managed to win over the heart of Callum Jones, who was originally coupled up with Shaughna Phillips.

She entered the main villa arm in arm with the hunky scaffolder, leaving the democratic services officer heartbroken. Molly and Callum were dumped from the villa on day 38

However Molly and Callum only lasted a few weeks before they were booted off the show.

A year on and the lovebirds are still going strong.

Shortly after returning to the UK Callum and Molly found themselves isolating together during lockdown, which led to Callum asking her to be his girlfriend.

Things are heading in the right direction as Callum has even hinted that he’d marry the beauty in the future. Hopefully Lucinda’s time in the villa will follow the same way as Molly as she’s already got a number of males keen to couple up with her.

Last night the bombshells had to pick a trio of men to cook and then share a dish with them as part of a three-course dinner.

Lucinda opted for a starter with Brad McClelland, Hugo to cook her main and Aaron to prepare dessert.

During the starter, Brad admitted to Lucinda that he isn’t really interested in his current couple Rachel. Will Lucinda’s time on the show be as successful as Molly’s?

He confessed: “I’ve only known the lass for two days, you’re more my type. For the first time, I’ve literally been like, ‘Jesus Christ, I’d be buzzing to get into bed with her.’

“I’ve never had that. I think you’re absolutely stunning. You honestly are.”

Lucinda responds: “Oh my God. Stop. That has made me happy actually.”

Although those watching at home weren’t so impressed – and pointed out how how similar his chat up lines have been with all the girls. Did you miss our previous article…
https://www.hellofaread.com/love-island/maura-higgins-confirms-romance-with-giovanni-pernice-as-she-shares-picture-holding-his-hand/

Prince Harry and Meghan Markle arrive back in California after jetting home BEFORE Queen’s...

Nearly times as many Brits would prefer Boris Johnson as PM over Jeremy Corbyn,...