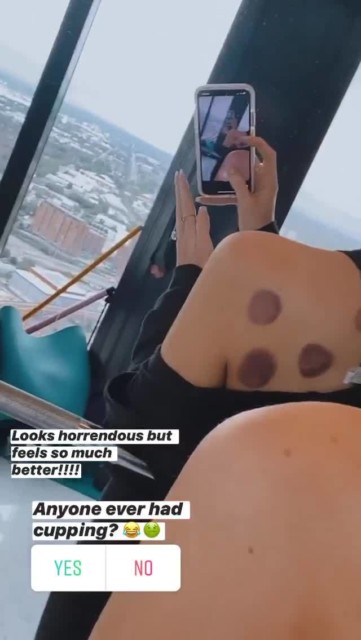 FORMER Love Island star Olivia Attwood has showed off a series of painful bruises on her back after undergoing cupping treatment.

The 29-year-old displayed the dark bruises on her Instagram Stories today, telling fans: “Looks horrendous but feels so much better!!!”

Olivia Attwood was left with bruises after undergoing cupping

The clip shows Olivia with her back to the camera as she films the bruises in a mirror.

The alternative therapy, which is a firm favourite with celebs, leaves painful looking red marks on the targeted areas.

During the treatment, a therapist puts special cups on their client’s skin and leaves them on for a few minutes – to create suction.

Traditionally, a flammable substance is used – such as alcohol, herbs or paper – in the cup, and set on fire. The Love Island star says she feels ‘so much better’ She previously appeared in the Love Island villa

As the flames go out, the cup is placed on the client’s skin and left there for up to three minutes – creating a vacuum as it cools.

This causes the skin to rise and redden as your blood vessels expand.

The treatment, which is said to offer a relaxing and relieving sensation, comes weeks after Olivia revealed she is taking medication for depression and anxiety.

The blonde beauty said that she started taking the medication five years ago – before finding fame on ITV2 dating show Love Island. The reality star recently revealed she is on medication Sharing a photo of her daily vitamins, she wrote: “I try and drink at least two pints of water soon as I wake up, sometimes with lemons.

“And then I take my vitamins, I rotate what I take quite a lot, but this is today (Oh, and my happy pills of course)”.

She was quickly inundated with private messages from followers asking about the “happy pills”, with Liv taking to her Story later in the day to share some more information.

She explained: “So, happy pills… Unfortunately, no, not something you can just go and buy over the counter – that is my name for the medication I take for anxiety and depression combined. Olivia appeared in the 2017 series of the dating show The happy couple are engaged

“I’ve been taking them for nearly five years – on a very low dose now, which I probably could just come off.

“We have spoken about me coming off but it’s just a bit of a security blanket, maybe when the world goes back to normal and everything’s not so unpredictable I will probably come off it but no rush, it’s very normal in 2020.”

Olivia also admitted she struggled with her mental health before appearing on Love Island in 2017 – going on to praise the reality show for “helping”.

She said: “I have been on them for four/ five years, meaning I started taking my medication way before Love Island.

“I suffered my worst period of mental health around two years before Love Island, and it’s been a positive upward journey ever since I started medication – but obviously I have little blips.”

Olivia added: “Since Love Island, I’ve been pretty good so yeah, not connected – sorry guys, I can’t blame that on Love Island.”

The reality star is currently engaged to Bradley Dack, with the footballer popping the question to Liv during a private dinner on the beach in Dubai.

Meghan Markle latest news – Duchess had ‘disastrous’ secret night out with Eugenie and...

Brexit Delayed Until May 22?

How Prince Charles turned to a Man Utd guru & Labour lord to turn...