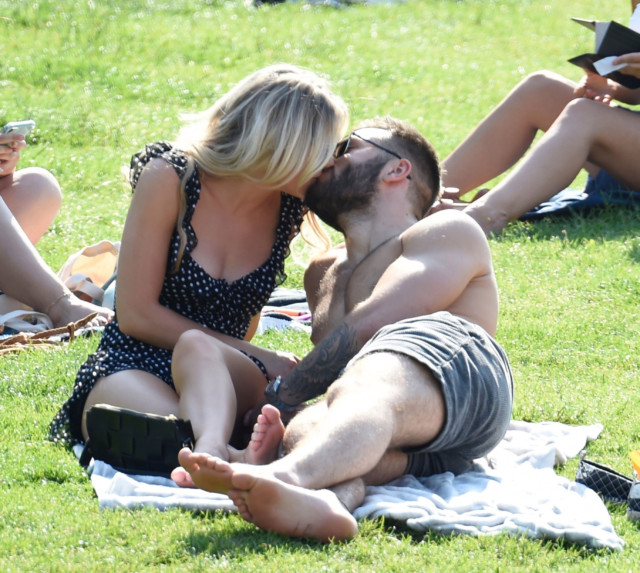 LOVE Island’s Paige Turley and Finn Tapp put on a loved-up display as they soaked up the sun in the park.

The stars, who won the winter series of the ITV2 dating show earlier this year, looked blissfully happy as they shared a smooch near their new Manchester home.

Paige and Finn put on a loved-up display They headed to a park near their new home in Manchester

Paige, 22, was dressed for the scorching weather in a black and white polka dot playsuit with frill detailing.

Finn, 20, wore a baggy yellow T-shirt over shorts, but stripped topless once they settled on a grassy spot to sunbathe.

The couple were seen laughing and smiling together, with Paige giving her boyfriend a peck on the arm before they enjoyed a full-on snog.

They moved into a Manchester flat earlier this month after spending three months living with Paige’s parents in Scotland. Their romance has gone from strength to strength Paige gave her boyfriend an affectionate peck on the arm Finn stripped topless to soak up the sun

The pair’s romance appears to be going from strength to strength since they met in the South African villa, with Finn admitting this week that he wants to propose to Paige “soon”.

He said: “I’m not going to wait – I want to propose soon! I don’t want to say a timescale as it’s going to be a surprise.

“Now all I have to do is ask for Paige’s dad’s blessing! I’ve got a few ideas about how I’d propose.”

Before the wedding, he and Paige hope to have their first child, with Finn continuing to OK! magazine: “We’ve spoken about the order we’d like to do things. They made the most of the UK heatwave “We’d like to get engaged, have a long engagement and in that time have a baby.

“I want a baby at my wedding and for them to be in the photos. We could put him in a suit.”

Paige and Finn are one of the few surviving couples from winter Love Island, with fellow finalists Siannise Fudge and Luke Trotman also going strong and renting a flat together.

Others have been torn apart by lockdown, with Ched Uzor admitting that not being able to see Jess Gale had triggered their break-up, whereas Demi Jones claimed that Luke Mabbott didn’t make enough effort in their long-distance relationship.

Prince Charles’ reveals last words to his dad on eve of his death –...