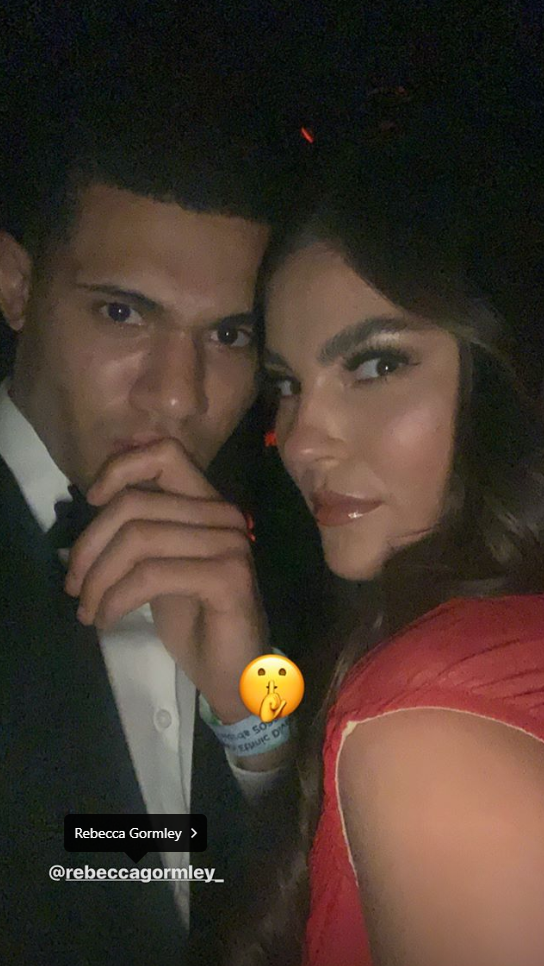 LOVE Island’s Rebecca Gormley cosied up to ex Jordan Waobikeze at a sports awards ceremony last night – and all in front of boyfriend Biggs Chris.

Last month The Sun Online exclusively revealed that the Geordie lass, 21, and car body repair specialist, 27, were officially dating – and their first date was at a kebab shop.

But it looks like the beauty queen got up close and personal with her ex Jordan, 24, at the British Ethnic Diversity Awards in London last night.

The administrator, 24, took to his Instagram story to document his big night out with the some other islanders, including: Luke Trotman, 22, Siannise Fudge, 25, Mike Boateng, 24, Priscilla Anyabu, 25, and even Rebecca’s beau Biggs.

In the now deleted snap the pair posed for a selfie together and Jordan placed a whispering emoji in between them and he covered his mouth with his hands.

During their time on the ITV2 reality show Jordan and Rebecca shared a kiss which led onto them coupling up together for the duration of their stay in the villa.

Jordan went on the join the girls in the main villa after the boys headed to Casa Amor – and it wasn’t long before he caught the eye of Rebecca – who wasn’t coupled up with anyone else.

The brunette beauty chose to keep Jordan in the main villa when the two camps were reunited after Casa Amor.

But their time on the show was short lived when they were voted the least popular couple in the villa.

Biggs and Rebecca have been dating since February 2020

Rebecca went on to admit that she thought their romance came “to a standstill” and said: “It wasn’t going anywhere. And I think if you want to be with someone things should be progressing every day, not at a standstill. It became a friendship rather than being in a romantic couple.”

The Miss Newcastle 2018 went onto admit that she regretted not getting to know any of the other boys.

“I wish I did chat to them all and find out more about everyone else – like Biggs. I loved Biggs (Chris). He was mint. His personality is the kind of personality I would go for. I would definitely meet up with him,” she said.

Insiders said that the beauty queen felt pressured to hook up with Jordan – despite wanting to get to know Biggs when she returned to the UK.

After being kicked out the villa alongside Jordan, Rebecca talked about “taking things slow” as she was quizzed about their relationship by host Laura Whitmore.

But within hours she was already having second thoughts and had been spending time with Biggs since flying back to the UK.

The pair finally went official with their relationship when they were pictured outside a kebab shop in the capital.

They tucked into a mixed doner kebab and chips and Biggs proved that he is Instagram husband material as he snapped Rebecca posed with her food for Instagram.

“Just had my first @germandonerkebabuk & it was absolutely naughty! I will definitely be going back#kebabsdoneright #ad,” she posted.

And Rebecca reciprocated as she snapped a picture of Biggs smiling with his “cheat meal”.

Biggs – who is signed to The Model Team – was one of the Casa Amor boys who got to live in the main villa for a week as he grafted for the girls.

During their time in the villa he couldn’t make a move because Rebecca and Jordan had already hit it off and so he set his sights on Jess Gale.

You can play Xbox games on your iPhone or iPad THIS week – how...