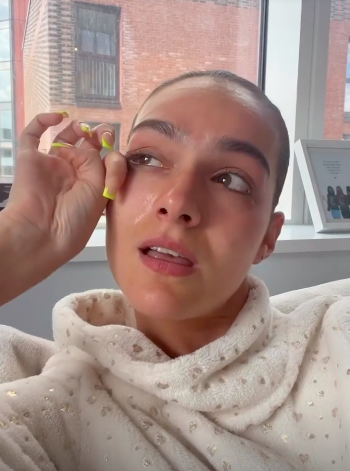 LOVE Island’s Siannise Fudge broke down in tears as she opened up about her battle with depression that led to her two stone weight loss and being hospitalised.

The reality star, 27, is best known for her stint on the sixth series of the ITV2 show at the start of 2020.

Earlier today Siannise took to Instagram to bravely open up about her recent mental health struggles.

She explained that she finally feels ready to share what she has been going through over the past 12 months.

The ITV2 star uploaded a snap of her in underwear from eight months ago, and put it next to one of her now looking happier and healthier.

Siannise told her 1.7m followers: “To my amazing family. I have been waiting for the right time to speak about something that I had been living with and couldn’t find the courage to share it, but thankfully now I feel ready.

“I feel I have a responsibility to share this because somehow it might help one of you and that’s all I want from this.

“To give anyone suffering the belief that you can overcome your obstacles in life. This time last year I was suffering with anxiety & depression behind closed doors.

“This resulted in me having insomnia, extreme mood swings & losing two stone in weight.”

Siannise went onto explain that she didn’t recognise herself “both physically and mentally” and it started to affect her everyday life.

The star continued: “I was insecure, lost all my confidence & I lacked love within myself. I couldn’t bare to look at myself in the mirror because I didn’t recognise myself both physically & mentally.

“I completely lost myself and I wasn’t sure who I was as a person anymore. It affected my everyday life, my work & my relationships with friends and family.

“I felt like I wasn’t in control of my body, I lost interest in things I loved the most and I found it impossible to socialise.

“I would receive messages on social media saying I’m too skinny, I need to eat some burgers and I’ve had to unfollow you because looking at you makes me uncomfortable which was extremely triggering for me.”

The former beauty consultant went to hospital and “begged” the doctors to help her.

They told her that physically she was fine, but mentally, she was suffering with “severe anxiety”.

Siannise continued: “I went to hospital twice for checks, and for someone who is terrified of needles I begged them to take my blood and help me.

“When the doctors came back with my results, they assured me they were all clear and there was nothing physically wrong with me and they told me I was suffering from severe anxiety.

“I was lost, depressed and unhealthy, but somehow I developed the strength to work on myself.”

But now a year on, the Love Island star is finally feeling herself again.

She ended the post by saying: “I turned every negative comment into fuel and motivation to get better and today I stand here, healed with a healthy mind & a happy heart.

“I feel beautiful, confident & I love my body now more than ever. I never understood mental health until I experienced it myself and how important it is.

“I urge everybody to be kind because you never know what someone is going through, everyone has a story.

“Every cloud has a silver lining, I am living proof of this

After posting the pictures to her grid, Siannise took to her story to open up to her fans.

Wiping away the tears from her face, Siannise said: I’m literally a mess. I was honestly so terrified to share that. I’ve been sat here for literally like half an hour sitting here thinking ‘am I doing the right thing?’

“But I just know that I’ll be able to help so many of you and that is my goal in all of this. Oh my gosh it really was the most hardest time of my life.

“When I literally look at that picture I just think like I’m just so proud of myself for like how far I’ve come because honestly it was just the worst thing ever.”

She went on to explain that she is always there for any of her followers that are suffering.

Siannise continued: “I just want to say that anybody that is going through this or they have gone through it, I can promise you, you will get through it. You will pull through it. If I can do it, believe me, anyone can.

“My DMs are always open if there is anybody out there that is struggling or just want a bit of advice, I’m absolutely here for you.

“I’m going to do Q&As and stuff on any questions because honestly I’m just so overwhelmed with it all.”

Siannise ended the clip by thanking everyone for their kind messages.

She said: “I appreciate every single one of you for all of the support already on the post. I love you all so much. Siannise is finally feeling herself again after a difficult year Siannise shot to fame in 2020 on Love island

What is a Queens Speech and why are they so important?

7 things you can recycle at Tesco as it rolls out soft plastic recycling...

John Lewis reveals top 10 toys for Christmas – and it’s a return to...