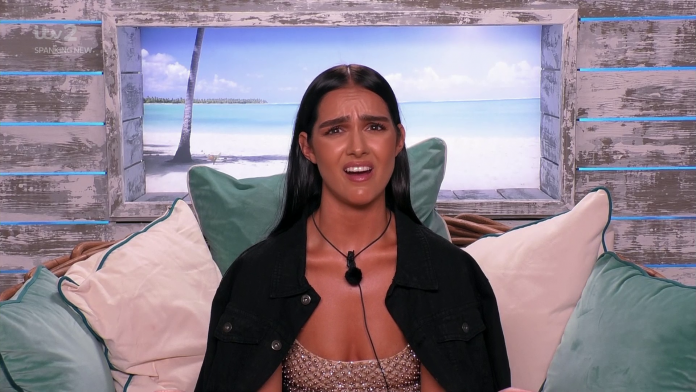 LOVE Island’s Rebecca better watch her back because Siannise has declared all out war on her.

This is the second time that the Geordie lass has nabbed the Bristol babe’s man.

Siannise, 25, was heading for romance with Connagh earlier in the week before Rebecca swooped into the villa and took him for herself.

But in the latest episode we saw her change her mind and choose new guy Luke T, sending Connagh packing.

This did NOT impress Siannise he was left fuming.

At the end of the episode as Connagh was saying his goodbyes, the girls were seen making their way back into the villa.

Rebecca chose this moment to explain herself to Siannise who was having none of it, saying sternly: “We’ll chat later.”

Immediately viewers were shown her venting her anger in the Beach Hut.

She fumed: “It’s literally a kick in the teeth. She’s gone behind my back, there’s no loyalty there.”

The drama unfolded last night when the girls were handed the power to get rid of a lad just 24 hours after newcomers Luke M and Luke T arrived in the villa.

The claws were immediately out as the feisty females attempted to make a move on the good looking fellas.

Rebecca then sent shockwaves through the villa when she announced she wanted to couple up with Luke T despite snogging Connagh the day before.

It was then down to Siannise and rather than picking Connagh she decided to go for Nas.

She said: “So I haven’t actually planned this as I wasn’t very prepared as the guy I wanted to choose has been picked.

“I want to couple up with this guy as he is the life and soul of the villa, he makes me laugh 24/7, his personality is amazing and it hasn’t gone unnoticed.

“I would love for him to have the chance to find the girl of his dreams and be happy. So I would like to couple up with Nas.”

Earlier in the week Rebecca had told Connagh that he ticked all her boxes and the pair enjoyed a smooch.

Connagh then proceeded to shut things down with Siannise for the second time telling her he was only interested in Rebecca.

Nas had been coupled up with Jess but is yet to be in the romantic couple with anyone.

After the new boys arrived last night they were given the chance to choose a girl to take on a date.

But Rebecca had made it clear she wasnt closing off her options and that she was interested in getting to know them to which was sign of what was to come.

Maura Higgins fears being axed from Dancing On Ice in the skate off after...

Promised clampdown on Google and Facebook from lifting stories from newspaper without paying delayed...