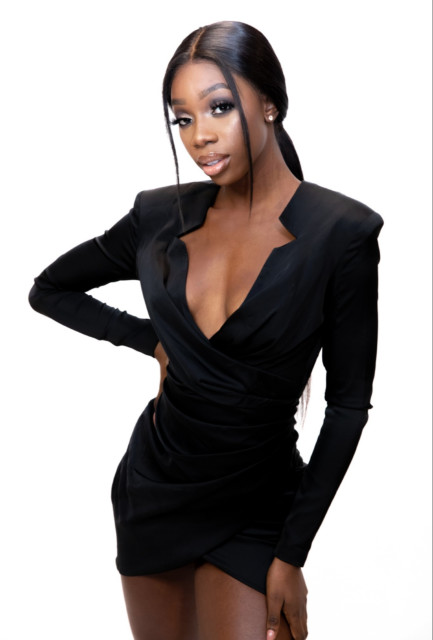 LOVE Island’s Yewande Biala feared she would be “kidnapped or murdered” by a date she met on Tinder who was obsessed with her underwear.

The 23-year-old was left shaken by the experience after being driven home by the man she met online.

Referring to the love interest as Bob, Yewande told Pretty Little Thing’s podcast Behind Closed Doors she joked with him about being a “psychopath” before the evening took a turn.

Yewande said: “I had a horrible experience, I nearly got kidnapped.”

The scientist was dropped off by her mum for drinks after meeting on the online dating site.

After he offered to take her home, ‘Bob’ began scratching Yewande’s legs with his nails. Yewande felt uncomfortable when her date started scratching her leg

She says he tried to feel her underwear through her dress and then quizzed her on what colour it was – despite Yewande feeling uncomfortable.

“For some reason he thought this was sexy,” she told the podcast.

“He starts scratching my leg and I’m thinking ‘oh my god what am I going to do? I have no credit, I can’t call anyone. I can’t actually jump out the car cos I was in the middle of nowhere and what am I gonna do?’.

“And then he starts like asking me what colour underwear I have on! I thought I was going to get kidnapped. I was like, ‘this is how people die and get locked up in dungeons’ like this is how it happens! The Love Island star got dropped off at a random house

“I was too scared to react cos I was like: “What if this goes south and he just goes insane? Then what am I going to do?”‘

Yewande faked going into a random home miles from where she lived after asking to be dropped off.

She then walked home alone after getting rid of her date.

Yewande says she received a text message from him, which said: “oh hey, I hope I wasn’t being too forward, hope you had a great time…”

She admitted it was hard for her to find love on the ITV2 dating show, but was proud she didn’t quit – despite facing constant rejection.

Yewande got the boot after partner Danny Williams chose to couple up with­ newcomer Arabella Chi.

Did you miss our previous article…
https://www.hellofaread.com/love-island/caroline-flacks-pals-olly-murs-and-laura-whitmore-pay-tribute-to-a-loyal-friend-on-what-would-have-been-her-birthday/

Beirut explosion – Frantic search for hundreds of survivors trapped under rubble after blast...

Dancing On Ice’s Holly Willoughby jokes she and Phillip Schofield will have to skate...