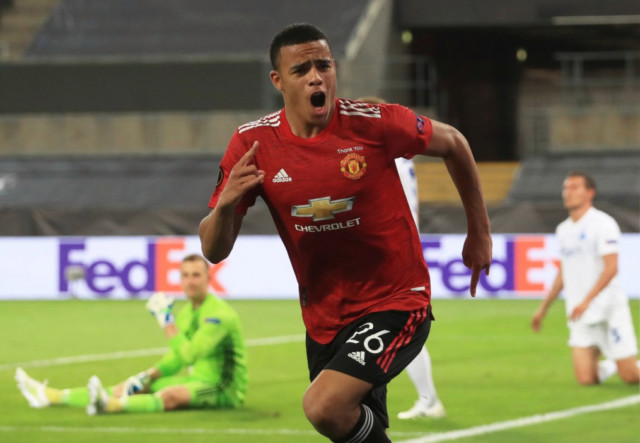 The Manchester United footballer was being chatted up by Love Island stars GEORGIA STEEL and JOANNA CHIMONIDES in a posh West London bar last weekend.

Mason shows his scoring skills off the pitch

An onlooker at Amazonico said: “Georgia was proper on the prowl that evening and went over to Mason and his group of mates.

“Mason really hit it off with them, especially Georgia. They flirted and then exchanged numbers.

“Joanna and Georgia didn’t turn up together but they are mates having been on the show, although not on the same series, but made a night of it.”

It comes after Mason was called up by England manager GARETH SOUTHGATE for next month’s Nation Leagues games.

A source close to Georgia said: “Georgia was just out with a group of friends enjoying a meal on Saturday evening.” Georgia seemed to take a liking to the England footballer Joanna Chimonides was also on the night out

Georgia appeared on the 2018 series of the ITV2 show when she gained fame for her catchphrase “I’m loyal”.

And Joanna featured on the following season when she was caught up in a love triangle with MICHAEL GRIFFITHS and eventual winner AMBER GILL.

Sounds like a recipe for disaster – stay away Mason.

Did you miss our previous article…
https://www.hellofaread.com/love-island/inside-alexandra-canes-gorgeous-white-home-with-morrocon-theme-after-she-transforms-her-living-room/

Coronavirus will be with Britain until ‘middle of next year’, PM admits

Apple Arcade expands with more than 30 new games – how to sign up...