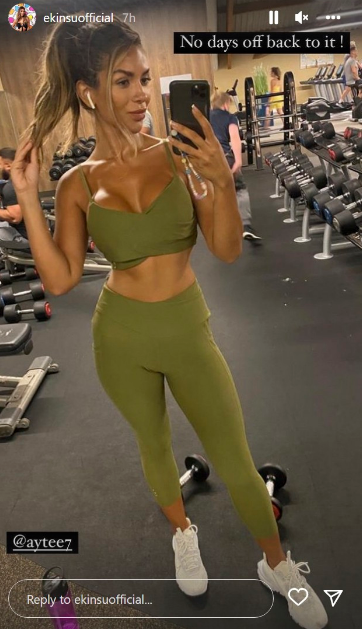 MARK Wright sent a message to Love Island champ Ekin-Su Cülcüloğlu as she posed in his fitness brand during a workout.

Ekin-Su, 27, shared snaps from the intense session yesterday and made sure to tag Mark’s brand Aytee7.

Ekin-Su wowed as she posed during an intense workout

The two unlikely pals actually go back years and recently a snap of them was unearthed showing them posing together while Ekin-Su worked as a shot girl during university.

It shows her with former Towie star Mark at a venue called Ships and Giggles, where she helped with celeb appearances.

During that time Ekin-Su went under the name of Susie Hayzel as she studied for her BA (Hons) in Acting before graduating in 2015.

Her former boss – Andy MacDonald – has opened up about her days working in the club, admitting he was very confused when she first appeared on screen.

He told LancsLive: “I’m not a Love Island fan at all but I keep getting these messages and phone calls saying about this Ekin-Su. They say Ekin-Su used to work for you and I say, I have never had anybody called Ekin-Su work for me, ever.

“After a while I thought, what is going on? Looked on Facebook and I go ‘for goodness sake, it’s Susie Hayzel! Her name’s not Ekin-Su, it’s Susie b****y Hayzel.

“I realised she was doing really really well and I feel proper proud of her,” Andy added.

These Remainers just want Brexit done and are voting Tory to make it...