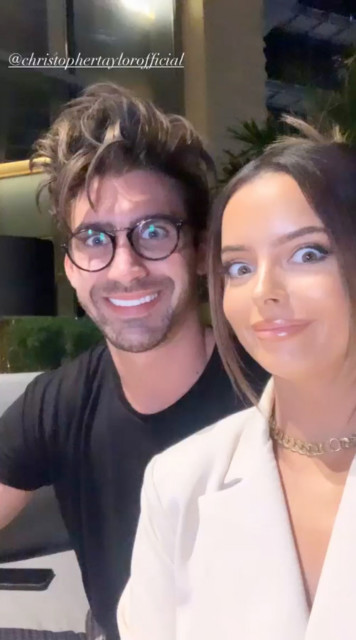 LOVE Island’s Maura Higgins and Chris Taylor are just like Monica and Chandler in Friends, so their pals say.

The new couple recently announced they were loved up and in a relationship after being good friends – and they’re now noticing similarities with the Gellar-Bings.

The tattooed reality star shared a photo of the pair posing for a snap alongside a picture of Monica and Chandler from The One With The Engagement Picture episode.

Both Chris and Chandler are struggling to take a good picture on demand while their partner’s look perfect.

Alongside the funny post, Chris shared: ‘Ta for that @MollyMaeHague’ – after Maura’s BFF Molly-Mae Hague likening them to iconic sitcom couple.

Maura looked glam in a white blazer style dress and gold necklace with her hair up in a sleek bun, with lashings of lip gloss.

Chris posted this linking back to the Friends couple

The duo are busy celebrating Maura’s birthday in Dubai with fellow Love Islanders.

Maura and Chris finally confirmed their relationship this week after months of insisting they were just good friends.

Chris was sure to make her milestone birthday all the more memorable when he surprised her with an expensive gift from Cartier – and a delectable dessert.

The former Dancing On Ice star marked the occasion with a swanky night out alongside Chris and pals.

Monica and Chandler aka Maura and Chris The way they were on Love Island

At one point, the Irish stunner was serenaded by her co-stars while they sang her ‘Happy Birthday’.

Just three months ago Maura told HOAR’s Fabulous magazine that she was “getting sexy” for her new man. The iconic Friends couple in the sitcom The new couple are in Dubai

“I’m getting sexy for my new man! Now I definitely feel like I’m ready to be with somebody.

“God help the next man I meet. I’m not sure he’ll be able to put up with me!”

In August, HOAR revealed Maura had spent the night at Chris’s house after the pair went on a night out bowling and ice-skating together.

The reality stars had long denied romance rumours until they finally admitted they were together in a cosy Instagram post uploaded to both their feeds recently.

Irish beauty Maura confirmed her split from Curtis Pritchard in March following her stint on this year’s Dancing On Ice.

Soon after their break-up, it was reported that Maura spent lockdown living in Chigwell, Essex where Chris also lives.

Although some fans were stunned by their announcement, others believe the ITV stars have been drip feeding us hints about their romance for months.