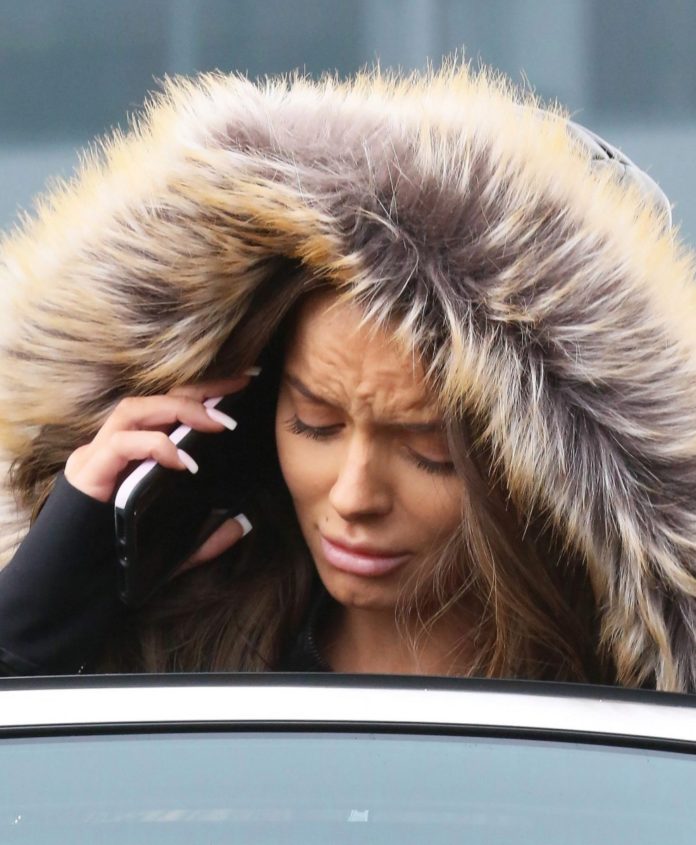 MAURA Higgins looked close to tears as she spoke on the phone today in the wake of her devastating split from Curtis Pritchard.

The 29-year-old Dancing On Ice star announced on Monday that their seven-month relationship, which was forged in the Love Island villa last summer, was over.

Maura Higgins looked devastated as she went to her car today

Wearing an enormous furry hood over her head, the star was shown looking like she was racked with despair as she got into a waiting car.

With a mobile phone clamped to her ear and her brow furrowed, Maura glanced around before clambering into her car.

The pictures come after both she and ex-boyfriend Curtis were yesterday photographed looking miserable after their split as they were seen separately in the capital.

The Sun Online revealed yesterday that Curtis has grown close to a gorgeous blonde dancer who performs on his tour show.

Clad in black, the Dancing On Ice star looked around before getting in

Maura revealed her relationship with Curtis had ended on Monday

Former grid girl Maura announced the relationship had ended on Monday night, with a message on Instagram that read: “Curtis and I have made the decision to separate.

“There is no easy way to get through a break-up and no bad feeling on either side. We tried to make it work but it wasn’t to be and I wish Curtis nothing but the best for the future.”

She signed off with a large emoji of a broken heart.

She explained: ‘We tried to make it work but it wasn’t to be’

Maura and 24-year-old Curtis had long been dogged by rumours they were no longer together, especially as they were seen on separate nights out despite being only a few miles apart.

On Saturday night Maura downed vodka from the bottle as Love Island pal Chris Taylor poured it into her mouth while partying at a club.

Meanwhile Curtis was out with his co-stars on The Greatest Dancer after filming wrapped just miles away from Maura’s night out.

What are play-to-earn games and how do I make money from them?