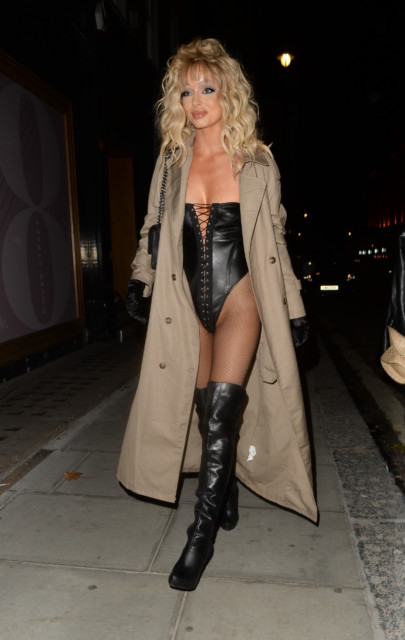 MAURA Higgins looked unrecognisable as she transformed into Pamela Anderson for Halloween.

The 30-year-old star looked glam in a blonde curly hair as she channeled the Baywatch babe for an Ann Summers event.

The Love Island favourite showed off her trim figure in a tight black leather corset.

Her underwear was laced up at the front and revealed her cleavage.

Maura channelled bombshell Pamela by opting for a huge wig with a fringe, just like the pin-up used to wear her hair.

She threw a cream mac over her ensemble as she headed to a do.

It’s not the first time Maura has dazzled with her Halloween look.

She dressed up as Julia Roberts’ character Vivian from the 90s classic romcom Pretty Woman for a night out on the town.

Heading out to Manchester, Maura wore a blonde bob wig as well as the signature blue and white dress that Vivian wore.

The dress is made up of a tiny white top half, held to the blue shirt by an attached silver ring.

As a result her flat stomach is on display, with thigh-high black boots completing the spot on look.

In the film, sex worker Vivian falls in love with Richard Gere’s Edward after he pays her to spend the week with him.

Despite Maura’s recent break-up, she looks like she was in good spirits as she hit the town ahead of Halloween.

She is yet to speak out about the split, simply deleting all photo of her and Strictly pro Giovanni from her Instagram account.

Giovanni later confirmed their split, saying the romance had simply “run its course.”