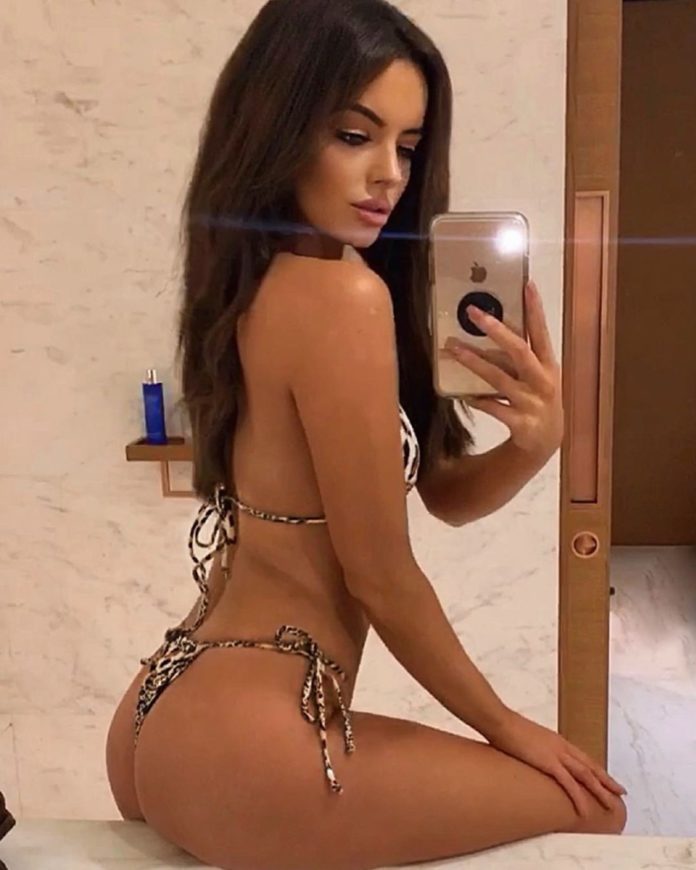 The Love Island beauty slipped into the leopard print two-piece and took a cheeky mirror shot.

She wrote: “smile for me baby.”

Her fellow islanders loved it, with Molly-Mae writing: “Unreal.”

And Lucie Donlan posted: “What a babe.”

Maura had deleted the pic after trolls accused her of photoshopping.

But she put it back up after recording a video denying that was the case and telling the haters to “get over it”.

The sexy shot comes after Dancing On Ice pros Carlotta Edwards and Alex Demetriou split up — after he became close to celeb partner Maura.

The professional skaters are said to be “taking a break” from their four-year marriage. But pals fear it is all over — amid claims that Alex, 28, is in constant contact with Love Island star Maura, 29.

Carlotta, 30, has taken off her wedding ring and flown back to her native Canada.

Alex — who removed his band in January — has remained in the UK.

The couple’s ­relationship started to crumble as Alex danced with Maura on the ITV series earlier this year.

A source said: “Carlotta and Alex are taking a break from their marriage and are trying to work out what they want from the future.

“Isolation is giving them a lot of time to think and both are with their families.

“Alex’s friendship with Maura was the first proper crack in their relationship.

“But now they’re at breaking point. Carlotta Edwards has fled the country and removed her wedding ring

“Their friends think the marriage is over because of how close Alex is with Maura. The trust between them has been shattered.

“At the start, everyone thought it was just a flirtation but Alex and Maura are in constant contact now and it’s obvious for everyone around them to see what is going on.

“Carlotta has seemed hell-bent on keeping up the pretence that everything is fine.

“But now she’s coming to terms with what has happened and is having a serious think about where she goes from here.” Alex was pictured visiting Maura at her flat in Essex just days before the UK went into lockdown.

A representative for Carlotta and Alex said the pair would not comment.

Election 2019 declaration times when will key seats declare their results?