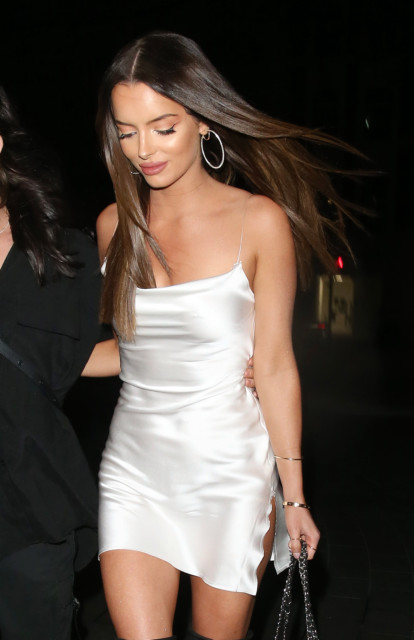 MAURA Higgins stuns in a sexy silk dress as she enjoyed dinner with Molly-Mae and Tommy Fury.

The former ringirl, 29, looked stunning as she stepped out for a night on the town with her Love Island pals.

The reality star appeared to be in good spirits as she stunned in a racy silver mini dress with a thigh-high slit.

The brunette beauty completed the look with a pair of stylish thigh-high black suede heel boots.

For the finishing touches, Maura decided to wear some fancy large silver hooped earrings and opted for a black quilted Chanel bag.

Tommy and Molly seemed to have the same idea as they both wore all black outfits. She was joined by Molly Mae and Tommy Fury The couple, who are still going strong after finishing runners-up on Love Island, held hands as they walked next to their close friend Maura after a meal at STK restaurant in London.

Molly-Mae, 21, looked flawless in a black trouser suit with grey silk stripes at the side.

The influencer coupled the trousers with a crop top, gold jewellery, heeled sandals and a designer clutch bag.

Boxer Tommy, 21, looked sharp in a black silk shirt which he teamed with a pair of slim fit jeans held up with Louis Vuitton belt.

He completed the look with a pair of black shoes and a glistening gold watch on his left wrist. It appears as though Maura is ready to get back out on the market again as she claims she is ready to find someone new.

In a bid to get her head straight after splitting from fellow Love Islander Curtis Pritchard, the former Dancing on Ice star imposed a man ban that has sparked – to date – six months of celibacy.

“Has this been the longest I’ve been without sex?” Maura ponders the question for a split-second.

“No, I don’t think so, because after a nine-year relationship I didn’t meet a guy until seven months later. That was a long time. Although, during lockdown it was nice not having the pressure of thinking about dating.

“I’ve never jumped back into a relationship and I’ve never had a one-night stand, so even if lockdown hadn’t happened, I don’t think I would have been with any guys. But now I definitely feel like I’m ready to be with somebody. I’m 100% single and ready to mingle!”

Did you miss our previous article…
https://www.hellofaread.com/love-island/emily-atack-signs-up-as-celebrity-juice-captain-after-holly-willoughby-quit-in-may/

Molly-Mae Hague horrified as she’s told to work a 12 hour shift in video...

Amazon Prime Day day date revealed – and shoppers can get £10 FREE to...

Easy PS5 and PS4 platinum trophies – how to get your score up with...