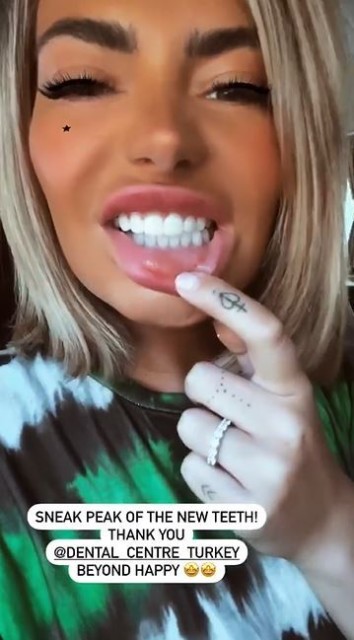 MEGAN Barton-Hanson has admitted she’s “beyond happy” at her new set of teeth.

The Love Island star showed off her gleaming gnashers after jetting off to Turkey to get the work done.

Megan showed off the recent work on her teeth

Megan shared a video of the result in her Instagram stories and captioned it: “Sneak peak of the new teeth! Thank you @dental_centre_turkey

Megan was sat in a car as she posed up a storm and gave fans a look at her bright white teeth.

She added: “There will be alot of teeth videos…sorry…

“I’ve not even brushed my hair yet and I’m doing the most on route for my final checkup”. The star flew out to Turkey to get the work done Megan admitted to having veneers in 2018

She shared a video on Instagram Stories of her wearing a mask and waiting to board a flight at Stansted Airport in London.

On the dental practice’s Instagram, it says: “Beautiful smiles at affordable prices”.

Megan also shared a video of her enjoying a drink at Wetherspoons at the airport before heading to the departure gate.

The visit to the dentist in Turkey comes two days after HOAR revealed Katie Price, 42, had also headed to the same dental practice, which has clinics in Antalya, Fethiye and Istanbul to get new veneers.

She headed to Turkey with her boyfriend Carl Woods to get ‘his and hers’ teeth.

Dan Osbourne also travelled to the practice’s Antalya branch in Turkey and had two of back teeth done, while his mum had “so much work done”. The star has also had two boobs jobs “I’m more than happy with mine,” Dan said in a recent Instagram post, tagging the same company.

In 2018, shortly after leaving the Love Island villa, Megan admitted to having veneers.

It was part of the star’s dramatic transformation where she spent an estimated £25,000 on surgery which also included two boob jobs, a nose job and lip fillers before heading into the villa.

Megan said at the time: “I had my first boob job when I was 19, but I rushed into it, so I had them redone a few years later to make them look more natural.

I don’t think the amount I’ve had done is excessive and I didn’t do it because I was deeply insecure.”

Did you miss our previous article…
https://www.hellofaread.com/love-island/pregnant-dani-dyer-shows-off-her-growing-baby-bump-in-ribbed-dress/

Love Island will pay tribute to Caroline Flack during finale after telling islanders about...

Where is the Love Island villa in Cape Town and can I stay there?