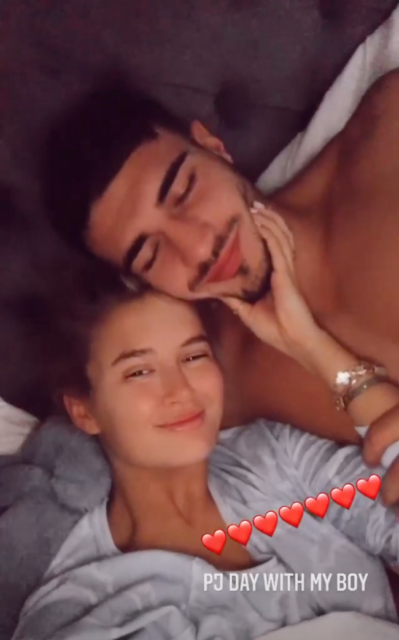 Molly-Mae cuddled up closely to her boxer boyfriend, both 21, and enjoyed a “PJ day” cuddling under the duvet.

They had both earned their rest, with Molly-Mae enjoying the sunny autumn and then getting their Cheshire home “spick and span” and urging Tommy to “hurry” home from London.

The night before Tommy stretched his unbeaten record to 4-0 on Friday night after knocking out Genadij Krajevskij in the second round of their fight.

Molly-Mae grabbed Tommy’s cheeks affectionately as they both smiled up to the camera. Tommy needed to rest after his huge knockout fight But she distracted herself by cleaning the house And taking in some rare sunshine

After their afternoon nap the pair indulged in a cheat meal of Chinese takeaway, complete with a side serving of chips.

“The only cheat meal I’m joining him for,” Molly-Mae said of her plate loaded with noodles, sweet and sour chicken, spring rolls and fried rice.

The couple then continued their lazy evening by cuddling up on the couch to watch the rom-com The Holiday, starring Kate Winslet and Cameron Diaz.

Molly-Mae would have been happy to be reunited with her fighter beau after being banned from attending his first fight of 2020. During a Q&A with her 3m followers, one eagle-eyed fan noticed the pair and had not been seen together for a few days and asked: “Where is Tommy why are you two not together!?”

The blonde beauty answered: “So many questions about why Tommy and I aren’t together right now and that is mainly because he has gone away for his fight on Friday.

“He’s had to create like a new social bubble down in London and I wasn’t allowed to go… we’re not going to talk about it.”

She added: “I’m not actually allowed to go to the fight. “I’m watching it on telly at home. Like it’s going to kill me. I’m really really gutted about it like I was so excited to go but Tommy was like you’re not going to be able to come and I literally thought he was joking but thats how serious this corona stuff is.”

Even though she had to watch the fight on telly, the blonde beauty did take some credit for his win.

She showed fans a “protection crystal” she had placed on her window sill the night before.

“I’ve never believed in crystals or anything like that but Tommy won his fight so maybe I’m a crystal stan now?” Molly-Mae wrote on Instagram. Tommy was fitter than ever ahead of his major fight

Her crystal might have helped, but Tommy’s hard work and intense preparation may have also played a part in his victory.

Tyson Fury’s younger brother was ready and raring to go and showed off all his hard work in the gym with an Instagram snap.

Tyson – a WBC heavyweight champion himself – praised Tommy’s efforts in the fight, saying it was the “KO of 2020”.

Im a Celeb fans shocked as Cliff Parisi does a trial hours after avoiding...