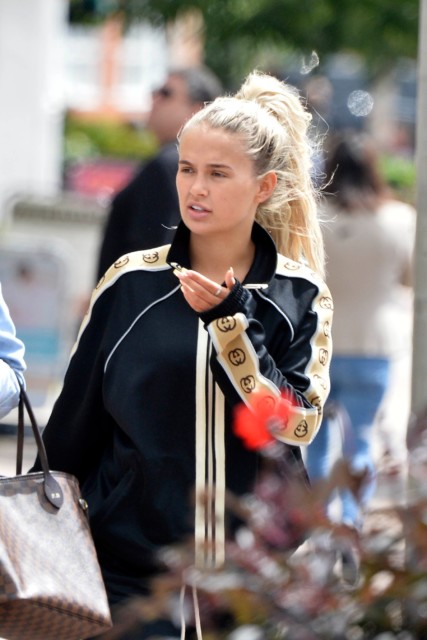 FORMER Love Island star Molly-Mae Hague showcased her natural beauty while out in a £1,800 Gucci tracksuit in Cheshire.

The 21-year-old looked incredible as she went make-up free for the outing – just days after her boozy weekend with boyfriend Tommy Fury and pal Maura Higgins.

Molly-Mae Hague flaunted her natural beauty while out in a £1,800 Gucci tracksuit

Molly opted for a casual look in the designer two-piece, which she teamed with a pair of black Balenciaga trainers and a Prada rucksack.

Meanwhile, her blonde locks were crimped and styled into an effortless ponytail.

Clearly still sporting a natural tan from her recent Ibiza getaway, Molly looked glowing as she headed to the lunch date without a scrap of make-up.

The influencer has spent the past few days partying with villa co-stars Tommy and Maura. Molly was spotted out and about in Cheshire

The group kicked off their weekend with a boozy night out in London.

The reality stars – who met on last year’s series of the ITV2 show – headed to London’s swanky Mayfair area for the evening.

During the night out, Maura was filmed crashing to the floor while play fighting with boxer Tommy.

The trio were out in force to celebrate hair stylist pal Jay Birmingham’s birthday, who also joined them for a spot of day drinking in Essex hotspot Sheesh the next day. She teamed the all-designer ensemble with gold jewellery Tommy sported the same tracksuit over the weekend

Maura, 29, has since joined Molly and Tommy for some rest and relaxation in their home up North.

Taking to her Instagram Stories to give an insight into her chilled stay, Maura zoomed in on Molly wrapped up in a hoodie and surrounded by cuddly toys.

Molly previously told her Instagram fans that she and Tommy moved into their plush rented flat after deciding their old place in Manchester felt too “sad” following their puppy Mr Chai’s death.

The reality star added that they’re still on the hunt for a permanent house they can buy together – despite their amazing surroundings. Tommy and Molly hit it off in the famous villa Maura has remained close to her former villa stars

“We’ve been looking for a house since we left Love Island, we’ve literally been on Rightmove every day,” Molly revealed.

“I don’t want to take out another six months on this place, because renting is so expensive.”

Overwatch 2 release date and news – all the latest rumours revealed

Molly-Mae Hague goes on £3,000 shopping spree at Selfridges while Tommy Fury is away...

EastEnders’ Kheerat Panesar star has a second job away from soap – and it’s...