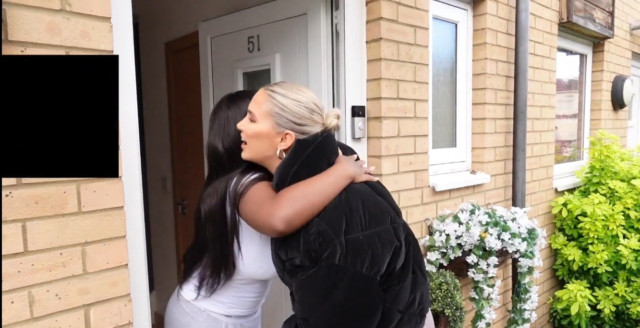 MOLLY-Mae Hague appeared to break coronavirus guidelines when she hugged a competition winner without wearing a face mask while visiting her home in October.

The Love Island star, 21, travelled from her home in Manchester to Joyce’s home in south England to meet the winner of her £8,000 Louis Vuitton giveaway, shortly before the country was plunged into the second national lockdown.

The competition had already been hit by controversy when Molly-Mae was forced to defend how she chose between the two million people who entered her competition to celebrate reaching one million subscribers on YouTube.

Sharing the trip on a vlog on her YouTube page, Molly-Mae revealed the visit was a complete surprise.

“It will be cute!” she said from the luxury flat she shares with boyfriend Tommy Fury.

“I hope she doesn’t mind me filming her. If she does mind then obviously I won’t.” After arriving at Joyce’s home Molly-Mae surprised the winner as she opened her front door and gave her a hug – without wearing a face covering.

“I was not expecting to meet you in person!” Joyce said as they embraced. She gave away £8k of her own designer handbags to fans

Molly-Mae went the house and was introduced to Joyce’s sleeping baby daughter.

According to the Daily Mail, the video was filmed in October before being released on YouTube in November. Molly-Mae Hague is under fire from fans

Molly-Mae was accused of “fixing” the giveaway and was forced to film herself explaining how her management selected 25 of her followers who had left comments under the post.

The people were then added to a spreadsheet alongside a number between one and 25 before being selected at random.

But after the lucky winner was announced, fans complained about the selection process being “unfair”.

One said: “25 names in a generator? Lol Molly-Mae is taking the p***. I might even unfollow her. How is that fair?” Another added: “Wtf is with Molly Mae picking 25 names out of the comments instead of the few million that actually entered.”

Someone else moaned: “Nobody had a chance hahahaha it even would of been fairer to scroll wheel the likes.”

A fourth said: “Imagine running a competition that millions of people enter and you can only be bothered to pick up 25 names… well your management.”

Responding to criticism, Molly said: “For people saying that 25 names in a generator isn’t fair… we literally spent all week brainstorming the best way to pick.

“There was no software or app that would allow me to put in two million (I repeat two million) Instagram comments without logging in with my Insta password, which I would never do.

“Let’s just all be happy for the winner please.

“It’s only a light-hearted giveaway.

“The 25 names had all entered more than once… including the winner.

“Let’s be happy for her! She deserves it!”

The Love Island star gave away £8,000 of goodies to her fans – and footed the bill herself.

The star – who is worth millions with boyfriend Tommy Fury – offered fans the opportunity to get their hands on six Louis Vuitton bags, a variety of Apple goodies and some products from her own beauty range.

Did you miss our previous article…
https://www.hellofaread.com/love-island/zara-mcdermott-strips-off-to-white-lace-lingerie-after-getting-back-with-sam-thompson/

Is Emmerdales Kerry Wyatt pregnant? Cain Dingle is expecting his fifth child with the...

How Jamal Edwards went from council house to £8m fortune and pals with Prince...