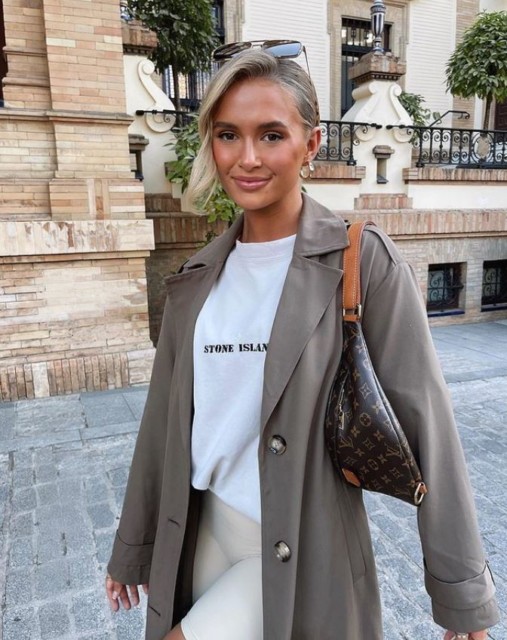 The Love Island star, 22, took to her Instagram story to show off her new cream Louis Vuitton LV Archlight Trainers and captioned the shot with a mouth-watering emoji.

The designer shoe with a futuristic look was originally released as part of the French designer’s Spring-Summer 2018 collection – and continues to be a classic for fashion fans.

The star’s latest splurge comes weeks after the apartment she shared with boyfriend Tommy Fury was targeted by burglars, during which thieves got away with £800,000 worth of goods.

Following the incident, Molly and Tommy, also 22, immediately moved out of the Manchester property and into a gated home in a secluded part of Cheshire, favoured by footballers including Wayne Rooney, which is reportedly setting them back £12,000-a-week.

HOAR later told how boxer Tommy was looking into £25,000 protection dogs in an effort to beef up security.

A source said: “As soon as the burglary was discovered, Molly said she’d never live in the flat again and that she wanted the security of living in a house.

“But the prices for rent are crazy and they are looking to buy somewhere asap. Tommy also says he wants a guard dog because they are a real deterrent.

“Most of the footballers in the area have them and the burglars just stay away because these animals are ferocious.”

Speaking about the robbery last week, a tearful Molly said “karma will come” for the “evil” robbers.

The former Love Island star fought back tears as she opened up to fans about the shocking break-in, branding it the “worst thing that’s ever happened” to her.

In an emotional video posted to YouTube, the 22-year-old said the robbers “took everything” but that their punishment will come around to get them.

“It’s just a truly, truly awful thing to have happened,” Molly-Mae said. “Karma will come for the people that did it. That’s all I’m going to say because it’s just evil.”

Breaking down in tears in the YouTube video, Molly went on to reveal how sad she was to be leaving her home – explaining how she was more upset about that than losing her designer goods.

“The saddest thing about all of this – I don’t know why I’m getting upset – but when I speak about the apartment and moving out of it, that is the saddest part of this whole situation for me,” she said.

“It’s not the things that were taken, it’s not feeling violated for our space, it’s literally the fact we had to leave our apartment.

“That apartment was my happy place. It was my sanctuary. It was so, so, so special to me.

“We were absolutely forced out, we couldn’t stay there anymore. Too many people knew where we lived. How can I sleep there at night if ever Tommy goes away? It wouldn’t be possible.” Did you miss our previous article…
https://www.hellofaread.com/love-island/inside-jack-grealish-and-amber-gills-secret-romance-after-meeting-at-leeds-festival-and-dancing-on-stage-with-stormzy/

Strictly’s Maisie Smith reveals terrifying dance-off left her in tears and has knocked her...

Princess Dianas death could have broken Prince William but instead, it made him strong...