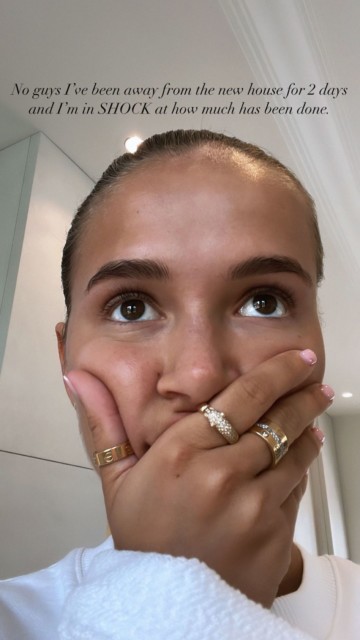 MOLLY-Mae Hague has shared with fans a glimpse at remodelling work on her £4million mansion – including a new £8,200 mirror and mega plans to double the size of her bathroom.

Last month the 22-year-old and boxer boyfriend Tommy Fury revealed the happy news that they finally found their perfect pad.

Molly-Mae Hague splurged more than £8,000 on a mirror for her new home

The Love Island star showed off the designer mirror which was actually the second time she splashed out thousands for the same piece.

Originally priced at well over £10k, the designer Timothy Oulton is having a sale, so it’s likely Molly-Mae got the unique mirror at the reduced price of a little over £8k.

Showing fans its new home and her recently purchased mansion, Molly-Mae gushed about the mirror.

Molly-Mae Hague unrecognisable as she reveals secret Irish dancing past )….. finally after repurchasing, it sits today in our new home, I smile every time I stare at it

She filmed a clip of her bathroom undergoing a huge transformation, as builders knocked down walls to double its size.

The former Love Island star said: “I’m not going to speak too much about this bathroom today because I don’t want to upset anybody but one thing I do want to say, this bathroom is changing for structural reasons.

“The bathroom is doubling in size, a completely different shape, size layout and everything.”

She also explained anything they removed would be recycled or used in another part of the house and “not just thrown in a skip.”

“Things we don’t use will be recycled. Things won’t end up in a skip. The transformation is going to be insane,” she went on.

The couple have also knocked down a wall to create a larger spacious master bedroom, which will feature a living area complete with a TV and fireplace.

She said: “We thought it would be better to have the master bedroom as a more open plan space. We’ll have a living area here.

“I’m really happy this wall is nearly all gone now and I can get a feel for how big the bedroom is going to feel.”

Molly-Mae returned to her new home after spending Easter Sunday morning at the place she’s renting with Tommy to check up on the remodelling.

She was stunned to see how quickly work had sped along while she was away on a recent trip to Belfast.

“I had prepared myself for the first few days of work while I was away to just be putting up dust sheets, no work to really be done… and I’m in literal shock at how much has been done,” Molly-Mae exclaimed.

The reality star also worried about ‘jinxing’ herself because it gave her hope the home renovations would be completed sooner than she thought.

“We’re not in any rush, but I can’t believe how much has changed,” she said, before giving fans a rare glimpse of the house.

Molly-Mae warned her fans that the house styling was her personal preference and did not want to be trolled for her choices.

She then showed fans Tommy’s wardrobe and dressing area, the master bedroom including where the fireplace would go and the bathroom.

“I just want to say the bathroom is changing for structural reasons… it’s doubling in size,” Molly-Mae said.

“I’m just in a really great mood,” Molly said as she wrapped up the tour.

It comes after Molly revealed that her £3.5m mansion is NOT her “forever home” and has plans to move again.

In a YouTube video she explained that she plans to live there for roughly five to ten years. The Timothy Oulton mirror is 2.4metres tall and weighs 165kgs Molly is remodelling her dream home with Tommy Fury During a YouTube Q&A, Molly was asked by a fan if this would be her forever home.

The Love Island star said she hopes to have her first baby and get engaged in her new home before investing in a second property.

Body found in search for man who ‘got into difficulty’ while swimming in lake...

Inside Coral as betting shops prepare to open next week with sneeze screens –...

Worried about jobs, money, taxes and holidays due to coronavirus? Our experts are here...