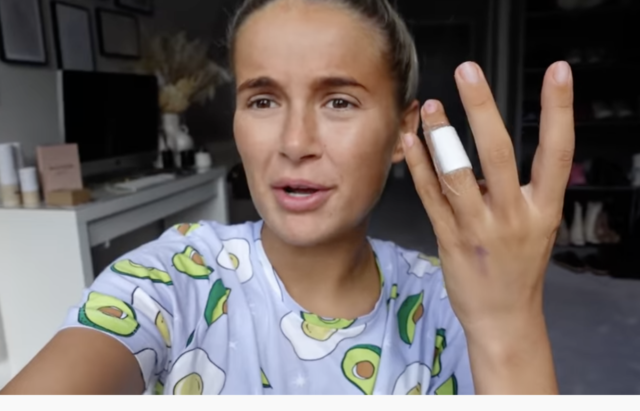 MOLLY Mae Hague underwent her second surgery in a week as she faced her ‘nightmare’ worst fears in hospital.

The Love Island star had a lump removed on her left breast, and also on her finger in the same week.

Brave Molly faced her fears to have a cannula put in her hand so that doctors could access her veins as they treated her.

“The finger one was really weird, it’s been there for a while. It’s like a really, large, prominent lump that stuck out. “

She added: “They have sent both lumps of for testing and I’m 100 per cent sure they are going to be fine because I did already have a biopsy on the one on my boob and they said it was fine.”

Praising her boyfriend Tommy Fury for taking care of her, she said: “I’ve been chilling and Tommy has been looking after me,” adding: “I do have another op next week, that is my endometriosis surgery.”

The model opened up about conquering her biggest fears this week.

She said: “I did conquer my two biggest fears in one day. When I tell you I had to have that cannula thing shoved in my hand that is my biggest fear on the planet. When I go to sleep at night and have a nightmare, that would be my nightmare, having the cannula.

“I have to not look down at my arm – that big black bruise.”

She then broke down saying: “I’m not ok,” before returning to the camera more upbeat.

Her vlog comes as she left her fans worried just yesterday when she posted a picture where she looked downcast.

One fan told the @prettylittlething creative designer: “You look so sad – sending you all the love.”

The star was sharing her first shot since having a lump removed from her breast and another from her hand.

She was seen sitting in the Manchester rain clutching a takeaway coffee cup with a coat over her shoulders and her £1,800 Prada bag by her side.

favourite season” and tagging in Pretty Little Thing, the fast-fashion chain she has a seven-figure deal with.

But while most agreed she was “stunning”, some worried the star wasn’t her usual sunny self.

One wrote: “U OK hun?” while another remarked: “Doesn’t loooook… like it’s your favourite? LOL.”

Others said she looked “so miserable” while one other wrote: “Is it just me or does she look really downcast?”

Molly opened up about her fears about going under the knife Fans thought she looked sad in her photo She urged fans to check their boobs Molly has praised her boyfriend Tommy for his support

Meghan Markle and Prince Harry went to a secret party in disguise before going...