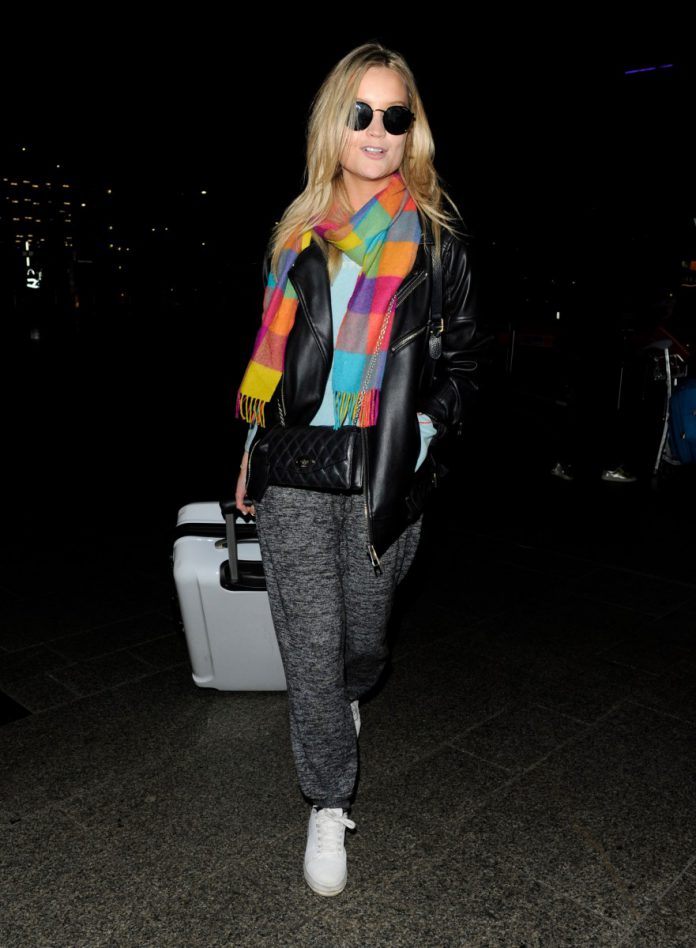 LAURA Whitmore was been pictured arriving at Heathrow airport yesterday as she prepares to make her Love Island debut.

The new host, 34, appeared happier than ever as she made her through the airport ahead of the long haul flight to South Africa.

She accessorised the look with a pair of black sunglasses and a multicoloured scarf.

Laura is no doubt feeling the pressure after replacing former host Caroline Flack on the ITV2 dating show.

However, her relaxed persona told a different story as made her way through the airport on Monday evening.

The 34-year-old appeared upbeat ahead of the flight

The host showed off her Love Island case

Laura greeted a friend ahead of the flight

In one snap, Laura appeared upbeat while arriving at departures.

While in another, the Irish host checked her in her heavy case ahead of the flight.

Earlier this week, Laura surprised boyfriendIain Stirling with a party to mark his upcoming birthday.

She left the comedian speechless after secretly organising the bash.

The Irish star, who replaced Caroline Flack, looked happy at the London airport

Laura was joined by two friends

The star jetted off to South Africa yesterday

Iain, who is famed for being the Love Island voiceover, even dropped the F-bomb as he walked in the door withLaurato be met by all of his pals in their kitchen.

The Irish star is said to be earning 500,000 for deputising for Caroline, 40, who stepped downafter she was charged with assaulting her boyfriend Lewis Burton, 26.

But there are no bitter feelings between the girls, withLaura telling The Sun that Caroline has been “incredibly gracious”since quitting.

Laura said: “I know shes got a strong network of people around her who are supporting her throughout all of this.

“She has been incredibly gracious and supportive of me taking on the role for the winter series.

“Shes a brilliant host and I just hope that I can give the role the justice it deserves while she is taking some time off.”

Coronavirus jobs armageddon hits with 12k jobs ‘lost’ in a DAY from businesses including...