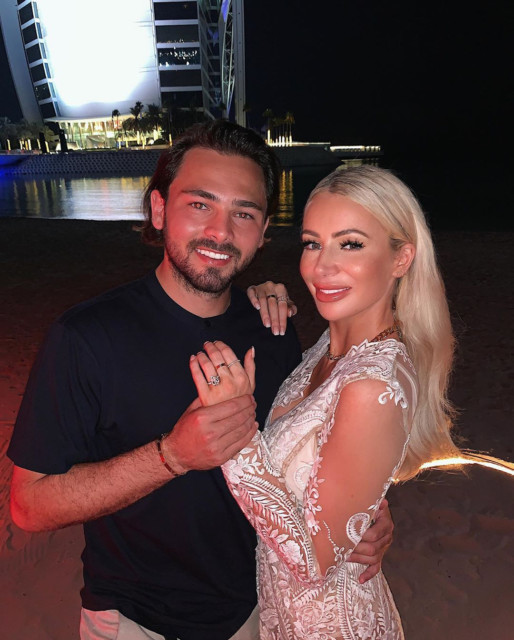 SHE may have failed to find her soulmate on TV, but Olivia Attwood scored a fiancé two years after leaving Love Island.

The 29-year-old is preparing to marry footballer Bradley Dack – and is planning an extravagant wedding on her new TV show, Olivia Meets Her Match.

Bradley Dack popped the question to Olivia Attwood in October 2019

But it’s not been smooth sailing for the couple who faced “dark times” when Blackburn Rovers player Bradley suffered a horror knee injury that almost cost him his career.

In an exclusive interview with HOAR, Olivia has opened up about being stronger than ever with Bradley – and even lifted the lid on their steamy sex life.

“The injury affected out sex life massively and it was very difficult for a long time,” says Olivia, before cheekily joking: “It meant I had to do all the work and normally I’m quite lazy in that department. Although Olivia describes herself as an “open book”, Bradley, 26, is more private about what goes on between the sheets – so might not be happy with Olivia being so loose-lipped.

She explains: “He is very laid back and he just goes with the flow, but the only thing he hates is when I talk about our sex life.

“When we are on our own we talk about sex all the time, but when people are around and I say something about sex, he will look at me and say ‘Liv’ and I say ‘yes’ and he’ll say ‘stop’. The blonde beauty has own TV show coming out

“He turns into a prude – maybe he’s a bit more well-mannered than me.”

It’s unlikely Brad will stay mad at Olivia for long though, after what they’ve been through together in 2020.

After his devastating football injury, Olivia became Bradley’s carer at home – helping him go to the toilet and wash himself as he struggled to walk.

It was far from how Olivia imagined life as an engaged couple to be – with further upset to come as they were plunged into coronavirus lockdown. With his career as a footballer under threat, the couple faced an anxious wait to see if he’d be able to play again.

Thankfully he’s “doing great” now and should be back to match fitness in a few weeks’ time.

“It’s been testing to say the least,” admits Olivia.

“Brad after surgery was one of the hardest times for us.

“He couldn’t walk or go to the toilet and he was emotionally struggling being away from football and his future hanging in the balance. The couple are stronger than ever

“He was in a very bad place. We were up in Manchester and we don’t have family here. That was really tough and there was some dark days around that time.

“We always say our first year of being engaged has not been the romantic holidays and dinners that we planned – it’s been the complete opposite – but
we feel like we are in a really good place.

“He says the way I cared for him after his injury showed him a side of me that he had never seen and said I was a lot more caring that he thought.

“We are really strong and it’s nice to know that life has thrown us curveballs and we have handled them.” Olivia at the Manchester apartment she shares with Bradley

Now fans will get to know Olivia and Bradley’s relationship up close and personal after they invited the cameras to follow their wedding planning.

And it’s the chance to see Olivia away from the drama of Love Island or The Only Way is Essex.

Olivia says: “I show my softer side and emotional side – after filming I cringe because people never see that side of me.

“It’s quite easy to watch shows like Towie and think that’s me – that is one feisty character.

“But there is lot more to a human that what you see on one show. “I am still gobs***e, party girl. But there is a whole other part of me that people haven’t seen.”

After coronavirus cancelled their wedding abroad, the pair are now looking forward to tying the knot in the UK next summer.

“With everything going on at the moment, facilitating a wedding abroad is impossible,” Olivia adds.

“We are doing it in England, hopefully by next summer if we’re not in the same situation, fingers crossed.

“We’ve got a date, other bits are falling into place, it’s really exciting.”

Meghan Markle news – Meg is ‘ANXIOUS to prove herself’ as Duchess & Prince...