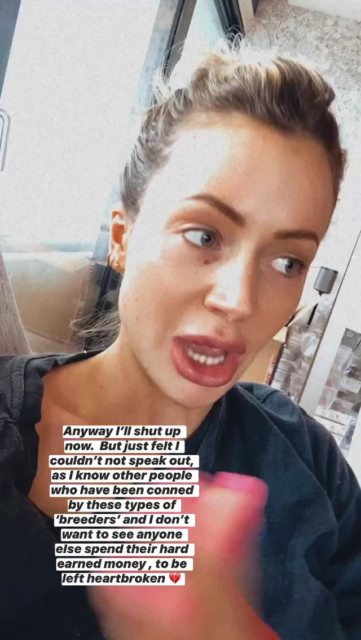 OLIVIA Attwood has revealed she’s been offered free puppies since finding fame on Love Island and says Molly-Mae was “conned” after her pet dog died.

The feisty Love Island star took to her Instagram story to condemn third party puppy dealers who she accused of profiting from the “miserable existence” of breeding dogs.

She said: “Since I’ve come out of Love Island I’ve had breeders like that message me offering me a free dog like they’re a f***ing pair of shoes or something.

“It’s just horrendous, and I really don’t want you guys  to go and pile on to Molly and Tommy because it’s not about them, they’ve been conned by one of these establishments.”

Molly-Mae revealed her heartache yesterday after her Pomeranian Mr Chai died just days after being imported from Russia.

Olivia continued: “At the end of the day if the laws were stricter these establishments wouldn’t be able to operate and then you wouldn’t have these kind of stories. “There is no care in that kind of breeding, taking dogs from third parties is purely a money-making industry, and the mothers of these dogs, well if you do some research, their existence is miserable until they can no longer produce puppies and they’re just basically disposed of.

“So for everyone who’s had a dog from this kind of breeder and goes ‘my dog’s fine’, well good for you, but the whole chain of misery that follows that dog is not fine.”

Molly broke down in tears last night as she spoke about the shock death of “our baby.”

The 21-year-old reality star – who was given the dog by boyfriend Tommy Fury as a birthday present last week – explained he vomited on hearing the news while she was convinced it was a cruel prank.

Speaking in a YouTube video, she also hit out at people who accused them of having the pet shipped over from Russia to be a social media ‘accessory’. Molly-Mae said: “People that are saying we bought him for Instagram likes, please stop saying that.

“Our lives are on social media, my full-time job is to show you guys what I’m doing. If I didn’t have Instagram, he wouldn’t be on Instagram.

“We’re not asking for any kind of sympathy. What’s happened is awful. I’m asking you to understand that the dog travelling from Russia is not the reason he died.” She revealed that Chai, who was imported from Russia, passed away two night ago

Mr Chai became a social media sensation in his short life, quickly achieving ‘influencer’ status after 150,000 people followed the account set up for him on Instagram.

Speaking last night Molly-Mae said: “I can’t even explain how happy we were when we got him. He was absolutely everything. He was just perfect.

“We just had our little baby – it was like we’d had a baby.”

Saying they soon came to believe he had health problems, she explained: “For the first two days he was absolutely fine. “From two days in, we started to pick up on a few things so we took him to the vet. I could tell something wasn’t right.”

She explained that she and boxer Tommy left him at the vets for treatment and got the devastating news he had died in a phone call the following morning.

Molly-Mae said: “The vet rang up and said Chai had a seizure and he died. Tommy literally threw up everywhere. Explaining they paid for a fast-track autopsy, the star claimed: “Chai’s skull wasn’t fully developed. Part of his brain was exposed. In a tiny dog, any knock probably wasn’t very helpful.”

She added: “Whilst we completely understand everyone’s opinions about being shipped over from Russia, what you need to understand is that is not what made him die.”

Molly also hit back at claims they had taken the dog out before he’d had has vaccinations, saying: “Chai had every single one – we have the paperwork. He was four and a half months old.”

The breeder who sold Tommy the dog insisted the pet was healthy, saying she had “rigorous processes in place to check animal health”.

Its Facebook account posted: “I only work with trusted people and have a small network of reputable breeders who care for their dogs to the very highest standards and see animals as part of their family.

“I have rigorous processes in place to check animal health and the suitability of forever homes providing support and guidance for health and wellbeing throughout.

“I have worked with dogs my entire life and this has never happened before.” Everton FC’s Russian bankroller Alisher Usmanov to be hit in fresh round of British...

Will Bob Hope get another chance with Wendy in Emmerdale? Fans hope not after...