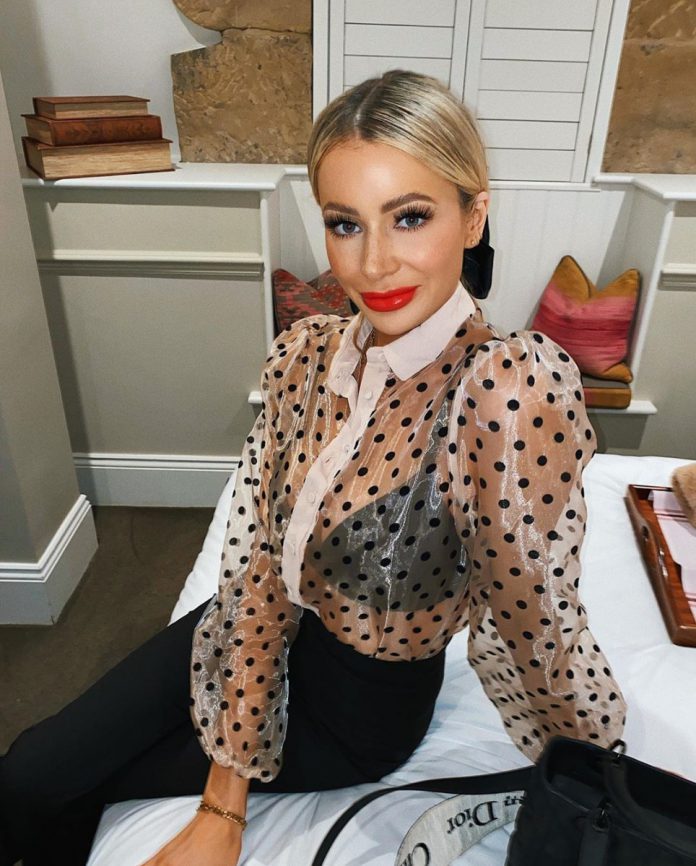 The reality star, 28 – who recently became engaged to her boyfriend Bradley Dack – kept fans guessing with another post on Instagram hinting that she’s pregnant.

The blonde beauty shared a photo sat on the bed in a sheer polka-dot top, with her black bra clearly visible underneath.

However, what grabbed fan’s attention was the captions, which was: “Mumma’s out out.”

In a follow-up post, the star is pictured without a drink once again.

A week before the star got fans speculating with a photo showing her in a baggy jumper and a soft drink.

She posed for the picture at Manchester’s Everyman Cinema, and went make-up free for her night out.

Yet fans were more interested in the wording of her caption, in which she wrote: “Cute fact; my mum used to wear this jumper when she was pregnant with meee.”

One promptly put: “That sounds like a subtle hint x”

Another added: “Is that a hint” with two beady eye Emoji icons.

One then directly quizzed Liv: “Dry Jan? Pregnant jumper? Do you have a bun in the oven?”

Another fan then put: “You trying to tell us something.”

Another then surmised: “Nahhh liv u cant be writing stuff like that .. now u have all us Nosey people Wondering.”

The star got engaged to her football player boyfriend Bradley Dack after he proposed in Dubai.

Fans might well be surprised if Olivia is expecting, aftershe did not get on with her pretend baby Cashduring her stint on Love Island.

The F1 grid girl, who came up with the name, justified her unusual choice by saying their newborn has been named after her favourite thing money.

Following their break-up fans saw baby Cash thrown into a box and discarded.