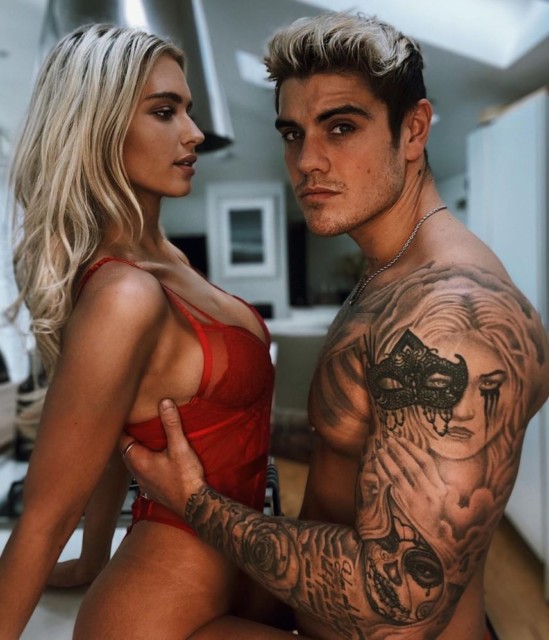 CELEBRITIES are flocking to social media to share soppy Valentine’s Day messages to their loved ones.

Piers Morgan, Jacqueline Jossa and Scarlett Moffatt are among the stars paying tribute to their other halves with sweet loved-up photos.

Lucie Donlan told her boyfriend Luke “I love you”

Love Island’s Lucie Donlan kicked things off this morning with a saucy tribute to her model boyfriend Luke Abbott.

Gushing over her “dream man”, the star posted a sultry photo showing herself in crimson underwear and her tattooed beau standing naked.

Writing a soppy message to balance things out, Lucie wrote to Luke: “Happy Valentine’s to my dream man. I love you.”

Piers Morgan kept things less X-rated, sharing a snap of his wife Celia tucking in to a massive burger.

Piers lovingly posted this snap of his wife Celia Walden

The Good Morning Britain presenter joked the secret behind having lasting love is to find someone to match your eating habits.

Piers wrote: “On Valentine’s Day, my best romantic tip is to find someone who shares your eating habits. #NoVegansInThisHouse.”

Jac Jossa joined Piers in celebrating her other half Dan Osbourne, with whom she shares two young daughters.

The former EastEnders star took to Instagram with a series of sweet snaps of the pair while they holidayed in Dubai last year. One sweet snap sees the loved-up couple recreating the iconic scene from classic film Titanic on the back of a luxury yacht.

While another sees them snuggling up close for a snap under a giant red heart statue while out on a shopping trip.

“Happy Valentine’s darling,” Jacqueline, 28, wrote underneath the heartfelt post, tagging her 29-year-old other half.

Scarlett Moffat joined the band of celebrities writing gushing tributes to their partners as she celebrated her policeman boyfriend Scott Dobinson. Beneath a photo of the pair smiling at an awards ceremony, the Gogglebox star wrote a sweet paragraph for their “3rd Valentine’s together”.

“Nobody else makes me smile the way you do,” she wrote. “I had almost given up hope on ever finding someone who would truly love me for me.

“I can’t believe my soulmate was right on my doorstep for the last 12 years and we didn’t even realise it. Our 3rd Valentine’s Day together.”

Scarlett made a toast to “many more days of laughter” with her boyfriend, directly writing to Scott: “I love you all the world.” Scarlett told boyfriend Scott she “loves him with all the world”

Other stars were equally soppy when they wished their other halves a Happy Valentine’s Day today.

Gogglebox star Lee Riley’s husband Steve also took to Instagram, writing: “27 years ago I gave a valentines card to the guy of my dreams.

“The rest is history. Love you too the moon and back Mr Riley #happyvalentinesday.”

Meanwhile, Jamie Laing – who made it to the final on Strictly last year – gushed over his Made in Chelsea co-star Sophie Habboo. He wrote: “No need to make this cheesier then it needs to be but I

Sonny – who is busy preparing to perform on tonight’s ITV show – said: “My Valentine. Sorry I’m not spending it with you today.”

One of the pictures captured the sweet moment in which Sonny proposed to his other half on a yacht while they holidayed together. The couple got engaged last year He bought his fiancée 100 red roses on Valentine’s Day

Like fellow skating star Sonny, Rebekah Vardy took time in between training for Dancing On Ice to celebrate husband Jamie.

Writing “I love you” to the England striker, Rebekah posted a sweet picture of her and her husband at Christmas.

Leicester City player Jamie gushed back with a series of heart emojis to his wife, with whom he shares three children.

Not the only footballer to be celebrating today, Harry Kane wrote a heartfelt message to his wife Kate and their children. Rebekah Vardy shared a sweet snap of her and husband Jamie Both shared photos of their three children, including new baby Louis, who the couple welcomed in December.

Other sports stars including Olympic boxer Nicola Adams joined in on the fun – posting a picture of herself and girlfriend Ella Baig.

“Happy Valentine’s Day,” she wrote to her lover, who simply gushed: “Its you because no one else makes sense.” Kerry Katona penned a sweet Valentine’s message to boyfriend Ryan Mahoney, sharing a sweet selfie on the pair cuddled up together.

“I’m so grateful for you coming into my life,” she wrote. “The things we have achieved together have been nothing but beyond amazing.

“You make me want to be a better person. I really do love you so much and so do the kids. You were the final piece of the jigsaw puzzle.”

Despite having husband Mark Wright to celebrate with, Michelle Keegan took time to wish her fans a “Happy Galentine’s” this year. Cuddling up to her two dogs, the star took to Instagram to share a bit of girl love for all the singletons out there.

The 33-year-old kept it casual in grey sweatpants and a matching jumper while celebrating the females in her life.

“Happy Galentine’s day from me and the girls,” she wrote, posing on the stairs of the home she shares with former Towie star Mark.

Not every star was lucky enough to have someone else to celebrate with, as singer HRVY led the way for the singletons. Michelle Keegan cuddled up to her dogs instead of husband Mark

The 22-year-old pop star drew a fake girlfriend into his selfies this morning, jokingly writing “Valentine’s Day” to his followers.

He was also joined by Emily Atack, who posted a photo of her drinking milk in suspenders while perching on a kitchen coutner. While it’s not known if she will be celebrating with her new beau, the star wrote a quick message to her fans.

“Happy Valentine’s my loves,” she penned underneath the snap as she smiled for the camera.

Did you miss our previous article…
https://www.hellofaread.com/love-island/megan-barton-hanson-reveals-how-she-realised-she-was-bisexual-and-relationship-that-confirmed-it/

Hollyoaks fans convinced Nico Blake has returned from the dead after Liberty and Sienna...