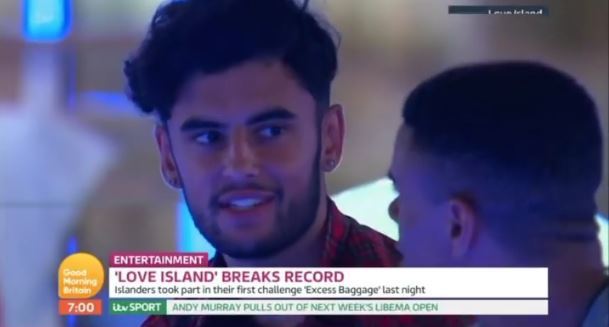 PIERS Morgan “made fun” of Love Island star’s Asperger’s a week after her got out of psychiatric care, Niall Aslam has claimed.

The reality star – who appeared on the ITV dating show in 2018 – shared a clip of the Good Morning Britain apparently making fun of the way he speaks.

Playing a moment where Niall stutters of his words, the clip then cuts to Piers who is making the same sounds in a mocking way.

Niall came forward with mental health struggles in 2020, while the clip is from 2018.

Niall – who revealed he quit Love Island because of he suffered from stress-induced psychosis – captioned the post: “I remember watching this a week after I got taken out of psychiatric care.

“I didn’t have a good understanding of what was going in with my reality anymore and I was dealing with psychosis new medications.

“Then you see a person in a position of such power making fun of my expressions and the way I was talking which is something I was slightly conscious of because of my Aspergers, this really got to me at the time.

“People really need to think before they talk. I’m in a better way now but at the time I was in a bad place and that wasn’t obvious, you don’t know what’s going on behind closed doors or what other people having to deal this kind of stuff could really impact people.

“Be kind it’s not asking a lot. Hopefully piers has learnt a lot this week”

Piers has been a long-standing critic of Love Island and has mocked other stars on the show.

Last year he branded the stars “brain-dead” as he did another impression of Ched Uzor hitting on Jess Gale. Ofcom revealed they are investigating ITV after Piers Morgan’s rant about Meghan Markle received the most complaints in a decade.

More than 41,000 viewers complained to the media watchdog following his remarks on yesterday’s episode of Good Morning Britain – and the TV host has now quit.

The presenter made dismissive comments about Meghan’s claims to have had issues with her mental health during the show.

He even claimed he didn’t believe she was left feeling suicidal. In the interview, Meghan told how life as a royal became unbearable and she “didn’t want to be alive anymore”.

The Duchess of Sussex, 39, said she begged for help but was told she would not be able to seek help as it “wouldn’t be good for the institution”.

But Piers had no sympathy for the pregnant Royal and ranted on the ITV breakfast show: “Who did you go to? What did they say to you?

“The fact she has expressed an onslaught against our Royal Family is contemptible.”

Apple Arcade expands with more than 30 new games – how to sign up...

Sarah Ferguson wrote to producers of The Crown offering to provide royal expertise —...