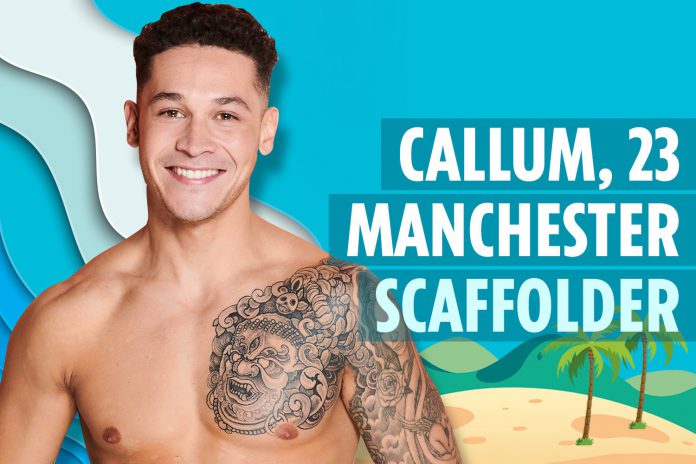 CALLUM Jones is heading into the Love Island villa this winter.

But who is he? Here’s everything we know about the cheeky chap from Manchester hoping to find love on Love Island.

Who is Love Islands Callum Jones?

Callum Jones is a 23 year old scaffolder from Manchester.

The self-described “cheeky chap” says he has “builder’s banter” and is “down to earth,” which he says “balances out” his saucy sense of humour.

He describes himself as “energetic, caring and up for a laugh”.

The Manchester lad rates himself a nine out of ten for looks, adding his cheeky smile and sexy dimples are his best feature.

Callum also says he’s a great cook, with Thai food being his speciality.

Callum stops to take a pic whilst out with his mates

Callum posing for some pool shots before he enters the villa

What is Callum Jones looking for in the Love Island villa this winter?

Callum is looking for an independent woman who looks like Megan Fox.

He’s a sucker for a sexy brunette and describes his perfect date as “a nice boat, cruise down a river and then dinner on a beach with the sun setting in the background”.

Callum is turned off by women who rely on others to do things for them “all the time”.

He says he’s prepared to “go pretty far to get the girl,” and once he gets her he’ll stay loyal.

He said: “You can look but you cant touch.”

Callum revealed he has met women online but prefers it to be “organic”.

How can I follow Callum Jones on social media?

His Instagram is littered with laid-back snaps from nights out, and a few boxing snaps hinting at a sporty side.

He has over 7,000 followers and can be found @_callum_jones.

We’re guessing he’ll more than double that by the end of the series.

The new winter series of Love Island is starting on Sunday, January 12, 2020on ITV2.

Both Love Island and Love Island: Aftersun will also be available to watch on demand on the ITV Hub.

EastEnders’ Lacey Turner teases Stacey Fowler will be back ‘soon’ after she’s sent to...

Nigel Farage tells Lib Dem boss to ‘get a life’ for contacting cops over...

Love Island’s Amy Hart says she’ll have a baby by herself and be a...

How old is Natalie Imbruglia and what are her best songs?