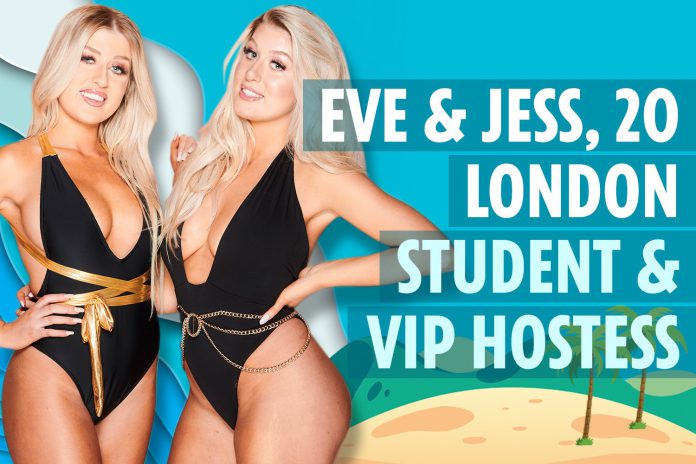 JESS Gale is one-half of a twin duo destined to take the Winter Love Island villa by storm.

Appearing on the newest series of the show with sister Eve, Jess will hope to find her dream man and win the first-ever Winter Love Island in history.

Jess Gale is 20 years old and like her sister Jess, is also a student and a VIP hostess.

The London-born stunner describes herself as very confident and claims she would make a good addition to the villa.

“Id be a good Islander because Im fun, confident and spontaneous.”

Asked to rate herself, Jess rated herself a 7.5, just a little higher than sister Eve who rates herself a 7, and says her best feature as her hair.

Jess has perhaps given Love Island bosses an insight into what sort of date she could get on the show, as she revealed her favourite first date to be drinks at a rooftop bar.

Like her sister, Jess also said that she wouldn’t make herself exclusive too early.

“But until that time I think its okay to have a wandering eye.”

Jess looking stunning on the beach

What is Jess Gale looking for in the Winter Love Island villa?

Simply put, Jess is hoping to find a guy who is on her wavelength.

When asked to describe her ideal man, she said: “Someone who is confident, not cocky. Self-assured, kind and respectful and on the same intelligence level as me.”

The twin then dropped a bombshell when she explained what her worst dating experience was.

“I was seeing someone and it was going really well. Then I saw him on Instagram in photos with a girl, the caption said A rare one, I love you.”

She continued: “Theyd been to Dubai together and were proper tight. The dates with me meant hed been cheating the whole time.”

Whilst also being willing to get what she wants, Jess also said that if things do not feel natural with a guy, she will not continue to search for something that is not there.

“If its meant to happen it will happen naturally. If Im forcing it, it probably shouldnt be happening in the first place.”

When does Love Island start and how can I watch it?

It is the sixth season of the popular reality TV show – and the first of two series to be aired in 2020.

Love Island usually airs every night with a recap on the week’s events on a Saturday.

Europe is ‘on the brink of war’ and Vladimir Putin ‘won’t stop’ after Russian...

‘Don’t take travel advice from me’, says Transport sec – as he warns Brits...