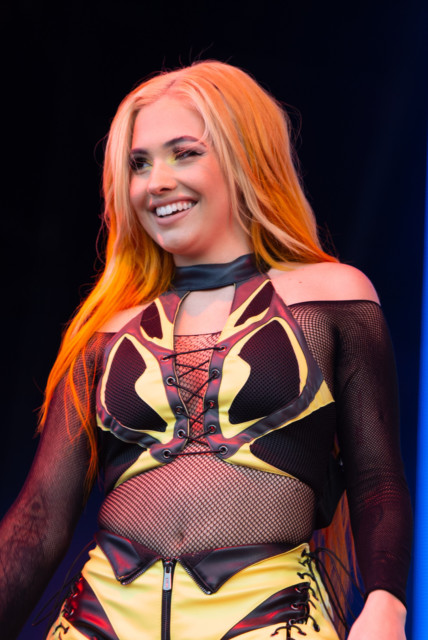 Popstar Mabel will be bringing music to the villa as she’ll be performing for the lucky Islanders this evening.

Mabel is a Swedish-English singer and songwriter

Mabel, born Mabel Alabama-Pearl McVey is a singer and songwriter.

The Swedish-English singer, born on February 19, 1996, is the daughter of legendary singer Neneh Cherry.

As a child, Mabel spent time in between Stockholm and Notting Hill, London.

Mabel has collaborated with huge names

She began her musical career on SoundCloud in 2015 making R&B songs such as Know Me Better and Thinking of You. The former was made Tune of the Week by BBC Radio 1 DJ Annie Mac.

Mabel then signed a recording contract with Universal.

She won the Brit Award for British Female Solo Artist in 2020.

Mabel has collaborated with huge names, including Not3s, Jax Jones and Stefflon Don.

She has also opened for pop sensation Harry Styles during the European leg of his tour.

What does Mabel sing?

Mabel’s career rocketed with her May 2017 single Finders Keepers with KoJo Funds. The track reached the Top 10 of the UK Singles Chart.

She then released Don’t Call Me Up, which peaked at number three on the UK charts – her highest charting single to date.

She then released her debut album High Expectations in August 2019.

On 7 June 2019, she released Mad Love, which reached number eight on the charts.

In February 2020, she released the popular song Boyfriend and later that year collaborated with AJ Tracey on the track West Ten.

Who has Mabel dated?

Mabel had a long-distance fling with Rome Flynn, best known for starring in US legal thriller How To Get Away With Murder.

But in August 2021, HOAR reported that the pair had split after their relationship faced “serious challenges”.

Rome is Mabel’s first love interest since she burst on to the music scene.

But the singer has explained that her 2019 hit Don’t Call Me Up was about having her heart broken in 2017.

She said: “I love writing about love.

“So some time soon a new relationship would be great for some inspiration for my next album.

“But there is no time to even meet people. I’m super-focused right now on what it is that I want,  and it (a relationship) is distracting.

“I also tend to go for the bad ones, so I need to keep my head above water.”

We tested orange squash from Aldi to Tesco and Asda against leader Robinson’s and...

Im A Celebritys Nadine Coyle denies feud with Cheryl even though they havent...

Liz Truss and Rishi Sunak face toughest test yet as they go head-to-head in...

Boris Johnson confirms he’ll make a weddings announcement on May 24 ahead of relaxing...