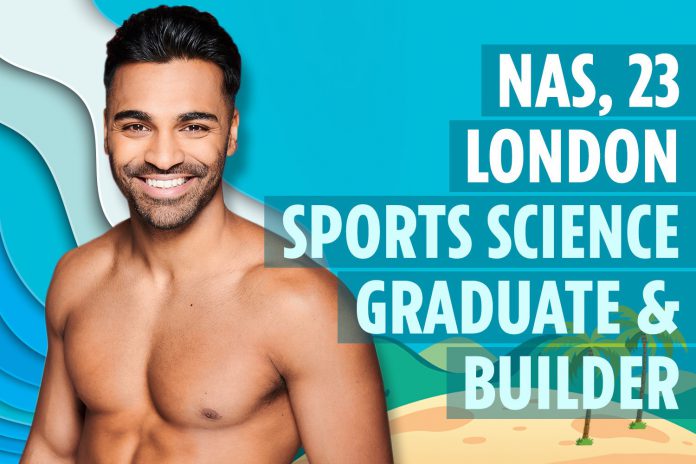 NAS Majeed says he’s not like the other guys who’ve graced the Love Island Villa before.

But who is he? Here’s everything you need to know about the 23-year-old sports science grad and builder from London.

Nas Majeed is a 23-year-old from London, currently working as a builder.

He is a sports science graduate who says he hasn’t been dating much lately, but would meet girls through uni or on nights out.

He describes himself as: “Funny, cheeky and charismatic”.

He adds: “Im funny, always myself, caring and considerate. Im a well-rounded person”.

The funny guy is always laughing – even in awkward sitautions, which he says doesn’t go down well.

Nas reckons he’s an eight out of ten for looks and his pearly whites make his smile his best feature.

What is Nas Majeed looking for in the Winter Love Island villa?

The 23-year-old is looking for someone with a sense of humour, he says he wants someone “who can match my energy”.

His celebrity crush is Naomi Scott who plays Princess Jasmine in the remake of Aladdin, with Nas describing his perfect woman as someone who is “cute and funny”.

The builder’s ideal first date is something hands on and active, he says “so we can have fun”.

The easygoing guy is looking for something genuine in the villa, and wont be using cheesy chat up lines to entice islanders.

He says: “If I think youre pretty, Ill tell you youre pretty.
“Or Ill comment on your outfit, rather than a generic chat up line.”

He adds that anyone who is “overly boisterous” would turn him off, and he’s always loyal in a relationship but “dating is different”.

The new winter series isstarting on Sunday, January 12, 2020on ITV2.