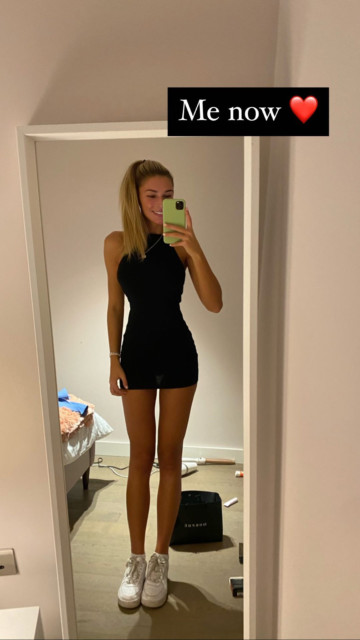 ZARA McDermott has spoken of her hurt after trolls accused her of promoting an unhealthy body image and called her anorexic.

The Love Island star, 23, proudly revealed she has lost three stone in the past 17 months and now has a much healthier lifestyle.

Zara McDermott has hit back after being called anorexic

But pictures showing her lean physique were met with abuse from some of her followers, leading to her trending on Twitter.

Zara, who isn’t on Twitter, called the platform the most toxic place on the internet.

Addressing her fans and haters on her Instagram story, she said: “I think it’s entirely unfair to call me ‘anorexic’. In my opinion it’s the same as calling someone morbidly obese. That’s a serious accusation of an eating disorder that I do not have.

“I understand that for anyone recovering from an ED. Any post about weight loss could be triggering. But my journey has been done incredible healthily.”

She was three stone heavier 17 months ago She insisted the transformation has been done healthily

Providing a history of her relationship with food, Zara explained she’s always struggled putting on weight no matter how many calories she consumes.

She continued: “I have always been quite tall and naturally slim. When I was a teen I struggled to put on weight. I was eating a huge amount back in 2019…

“I’m talking probably 3000 calories a day. I was a size 10. Which is not an unhealthy weight at all. But for my body type. Height and the fact I’ve always had a fast metabolism and always been naturally petite. It was a huge change.” Zara said she’s happier than ever She shared this toned gym snap

“Everyone’s body types are different. And I respect that. But I cannot be made to feel bad about my natural body type. I have naturally really long legs and a small waist.”

Hammering home that her transformation hasn’t been down to a fad diet or a starvation programme, Zara said it was about more exercise and greater education on the benefits of healthy food.

She said: “It frustrates me because this has been a long journey for me, changing my relationship with food to a more positive one, being more mindful, finding motivation to exercise when at times I’ve wanted to give up. Zara recently got back together with Sam Thompson

“It has taken me 18 months to get where I am now! That’s a long time! I haven’t dropped three stone over night. I have done it slowly and healthily.

“But it’s been a positive change for the better. I have so much more muscle now. I can lift heavy weights. I feel happier and healthier. And most importantly. I feel good on the inside, which means I will live a longer and healthier life!”

I made $1.4million from selling VIRTUAL items inside Roblox metaverse

I’m A Celeb’s Shane Richie and Jessica Plummer will down stomach-churning ‘cocktails’ in Sickening...

What time is Love Island on tonight?